Prejmer ( German  Tartlau , Hungarian Prázsmár ) is a municipality in the Brașov district in southeastern Transylvania in Romania .

The place is also known by the outdated Romanian names Prajmar and Preșmer and the German names Tartlen and Tortalen .

Location of Prejmer in Brașov County

Old coat of arms of Tartlau

The municipality of Prejmer is located on an area of ​​about 6800 hectares in the east of the Brașov district, in the southeast of the historic Burzenland , southeast of the Transylvanian Basin . The place Prejmer is located on the national road ( drum național ) DN 10 and the railway line Brașov – Sfântu Gheorghe – Târgu Secuiesc about 15 kilometers northeast of the district capital Brașov ( Kronstadt ). The incorporated village of Lunca Calnicului is three kilometers, the hamlet of Stupinii Prejmerului ( Rohrau ) four kilometers from the community center.

The Râul Negru (Hungarian Feketügy ) flows into the Olt ( Alt ) on the area of ​​the municipality .

Tartlau was founded by the Teutonic Order in the 13th century, first mentioned in a document in 1211. In the 13th century a cruciform church was built in the village , and in the 15th century one of the strongest fortified churches in Eastern Europe was built around the church. Tartlau was located in the south-east of Transylvania in the administrative area of ​​the historic Kronstadt County in the Kingdom of Hungary . Various archaeological finds - starting with the Early Bronze Age - show that the area was settled long before. According to J. Teutsch and H. Schroller, a stone grave from the Bronze Age was found near the "Villa Misselbacher" - so called by the locals.

Since Prejmer is not far from the Bodza Pass ( Pasul Buzău ⊙ ), the place was plundered and destroyed almost fifty times by Mongols, Turks, Tatars, Cossacks and Moldovans, but the fortified church was captured only once by Gabriel Báthory in 1611. 45.6747 25.96859

The population of Prejmer developed as follows:

In 2009 there were still 125 Transylvanian Saxons registered in the Protestant community in Tartlau. 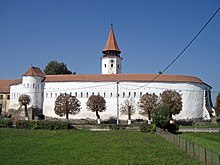 Images of the fortified church