Budila ( German  Bodeln , Hungarian Bodola ) is a municipality in the Brașov County , in Transylvania , Romania . 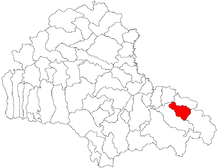 Location of Budila in Brașov County 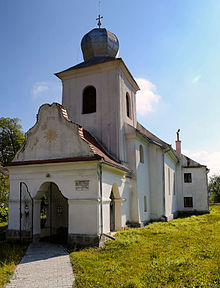 Budila lies east of the Burzenland within the Carpathian arch . At the confluence of the streams Zizin , Seaca and Valea Popii in the Tărlung - a left tributary of the Râul Negru -, the railway line Hărman-Intorsura Buzăului and the county road ( drum județean ) DJ 103B, the place is 14 kilometers northeast of the city of Săcele ; the district capital Brașov ( Kronstadt ) is 18 kilometers to the west.

The place Budila was mentioned in documents in 1211 or 1294, according to different sources. In the Middle Ages, the place was the residence of the Hungarian noble family Béldi , whose castle was destroyed in 1612. After the castle was rebuilt by Pál Béldi , it was lost in feudal disputes to Kelemen Mikes - a Hungarian rebel against the Habsburg Empire and one of the first Hungarian prose authors. This destroyed the castle, which was no longer built. Remains of the castle can still be seen.

The population of the municipality developed as follows: