Șinca [ ˈʃinka ] is a municipality in Brașov County , in Transylvania , Romania . The seat of the municipality is Șinca Veche (Alt-Schenk) . 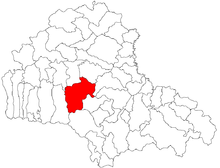 Location of Șinca in Brașov County

The municipality of Șinca is located south of the Transylvanian Basin , north of the Făgăraş Mountains (Fogarasch Mountains) . On the brook Șercaia - a left tributary of the Olt (Alt) -, on the national road (drum național) DN 73A and on the railway line Brașov – Făgăraş , the community center is about 23 kilometers southeast of the city of Făgăraş (Fogarasch) ; the district capital Brașov (Kronstadt) is located approx. 50 kilometers southeast.

The place Șinca Veche (Alt-Schenk) was first mentioned in a document around 1808. At the time of the Habsburg Monarchy , the 2nd Company of a border regiment was stationed here.

In the Kingdom of Hungary , today's municipality was in the chair district of Sárkány (today Șercaia ; Schirkanyen ) in Fogaras County , then in Făgăraș County and, from 1950, in today's Brașov County.

The main occupation of the population is agriculture and livestock.