Location of Hârseni in the Brașov district

The municipality of Hârseni is located in the northern foothills of the Fagaras Mountains ( Munții Făgăraș ). In the southwest of the Brașov district, the place is on the Sebeş brook - a left tributary of the Olt ( Alt ) - and on the DJ 104B county road ( drum județean ) about ten kilometers south of the town of Făgăraş ( Fogarasch ); the district capital Brașov ( Kronstadt ) is located about 80 kilometers southeast.

The place Hârseni was first mentioned in 1520.

In the Kingdom of Hungary , the municipality was in the Fogaras chair district (today Făgăraş ) in Fogaras County , then in Făgăraş County and from 1950 in what is now Braşov County. 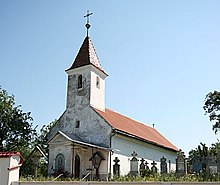