Holbav ( German  Holbach , Hungarian Holbák ) is a municipality in the Brașov County , in Transylvania , Romania . 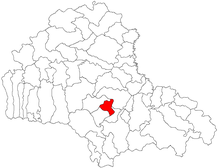 Location of Holbav in Brașov County 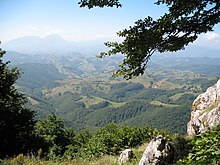 View of the hilly part of Holbav

The place consists of the two kilometers long, along the Holbav brook , the actual town center and the scattered properties on the surrounding hills.

Holbav was first mentioned in a document in 1570. The place was part of the municipality of Vulcan ( Wolkendorf ), became an independent municipality in 2004 with the restructuring.

Holbav does not have a drinking water supply or sewerage system. The properties on the hills surrounding the village center, about 130 or 211 households (according to various reports), do not have an electricity connection.