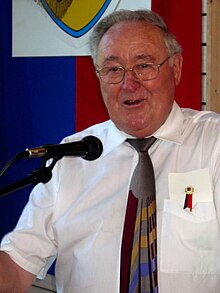 Michael Trein (born July 17, 1935 in Honigberg , Transylvania , Romania ; †  October 5, 2015 in Crailsheim ) was the only German mayor of Tartlau after the Second World War and a leading representative of the Transylvanian Saxon Landsmannschaft in Germany. He was awarded the Federal Cross of Merit for his services to the common good .

Michael Trein was born in 1935 in Burzenland, Transylvania, as the eldest of two children of Michael Trein and Rosa, née. Hedwig, born. The father died unexpectedly as a soldier during a maneuver in the spring of 1939. After the mother had remarried, the family moved to Tartlau the following year. Trein attended elementary school there and then the commercial school in Kronstadt , which he had to leave prematurely due to a decree of the Romanian Communist Party . This decree declared large landowners and the self-employed to be " exploiters ". As such, the stepfather was classified as a self-employed businessman and his family, with the consequence of expropriation and the compulsion to pursue low-level activities. Trein worked in the tractor factory in Kronstadt and was trained as a lathe operator. After another school year, two years of military service in Bucharest followed in 1956 , which he finished as a company sergeant . From 1961 to 1969 he was head of the state grain transfer point in Tartlau and then held the office of mayor of Tartlau until 1975. It was not until 1972 that he made up his degree in business school on a second educational path .

Trein took advantage of a visit to Germany in autumn 1975 not to return to Romania. It was not until 16 months later that his family who stayed behind received permission to leave Germany. A temporary job at City Hall Neckarwestheim he took from December 1976 until he joined the retirement in 2000 conducting duties at the regional council of Stuttgart and headed several transitional residences for emigrants and asylum seekers in Baden-Wuerttemberg .

Since 1961 Michael Trein was with Hermine, geb. Morres (1939–2008), married. He left behind two children, Wolfgang Trein, who holds a doctorate in economics and business consultancy, and Heidrun Trein, the human resources officer, and three grandchildren. 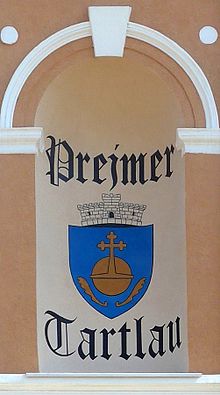 Section of the facade of Michael Trein's workplace, the Tartlau town hall, with the town's coat of arms and bilingual place names

In April 1969, Trein was elected the first post-war German mayor of Tartlau. As the second youngest mayor of Romania, during his six-year term in office, he made Tartlau one of the most respected, renowned and economically strongest municipalities in the Kronstadt district, which was the destination of many domestic and foreign visitors. The then President of the Bundestag Annemarie Renger , who officially invited him to Germany, was one of the visitors . For political reasons, the Romanian secret service Securitate Treins was unable to prevent a visit to Germany. However, the Securitate caused the mayor, who had become too popular with all parts of the population, to lose all offices in 1975.

In 1979 Trein founded the district group of the Landsmannschaft of the Transylvanian Saxons in Crailsheim, which he led for 25 years and of which he was honorary chairman until his death. In 1981 the “9. Tartlauer Neighborhood ”, which he also headed for 25 years and of which he was also honorary chairman. In 1982 he founded the Heimatbote “Das Tartlauer Wort” and was editor of it until 2006. From 1995 to 1998, Trein was state chairman of the Landsmannschaft of Transylvanian Saxony in Baden-Württemberg and from 1983 to 1992 in the federal executive committee of Transylvanian Saxony for the Transylvanian-Saxon hometown communities (HOG) responsible. In 2005, Trein became district chairman of the Association of Expellees (BdV) in Crailsheim. He was a member of the CDU .

Trein has significantly shaped and shaped the cultural life of the Transylvanian Saxons in Germany. In addition, for many years he organized the transport of relief supplies to Romania, which he also accompanied personally and whose distribution he supervised.