The old church is the former Roman Catholic parish church of Boswil in the canton of Aargau . It is located on the eastern edge of the village and, together with the former rectory and the Odilokapelle, forms a historical group of buildings. Originally a medieval fortified church , it was rebuilt at the end of the 15th century, replaced in 1890 by today's parish church of St. Pankraz and profaned in 1913 . Today the baroque building is owned by the Künstlerhaus Boswil Foundation . 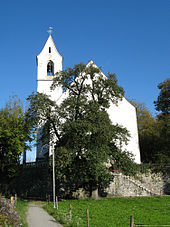 As can be seen from a document from the Fraumünster Abbey in Zurich , the Old Church , which was once consecrated to Saint Pankraz , dates back at least to the 9th century. Excavations in 1934 uncovered the foundation walls of an adjacent residential tower , the ancestral seat of the Lords of Boswil. A circular wall surrounded both buildings, which were probably built in the 11th century, making it a fortified church originally . This is mentioned in the Acta Murensia written around 1160 . After the Fraumünster, the lords of Hallwyl were the collators until they sold the parish to the Muri monastery in 1483 (the monastery had been owned by the Boswiler Martinskapelle since 1110 ).

After the purchase, Abbot Johannes Hagnauer had the church tower rebuilt, the choir rebuilt and possibly also the nave renewed. On 29./30. September 1498, Daniel von Bellino, Auxiliary Bishop of Constance, consecrated the church. After a three-year reformatory phase, a reconciliation took place in 1532 . In 1664 the nave and choir were expanded. When a crack appeared in the vault in 1696, the choir had to be rebuilt and received a flat roof. Prince Abbot Gerold Haimb had the main altar renewed in 1734.

The church gradually proved to be too small and could no longer be expanded. For this reason, the parish church of St. Pankraz in the upper village was built between 1888 and 1890 . After the old church had been profaned in 1913, the group of buildings was rented to the painter Richard Arthur Nüscheler and sold in 1918. Nüscheler set up a studio and made some repairs. His heirs sold the group of buildings in 1953 to the "Alte Kirche Boswil Foundation" (now the Boswil Artists' House ), which organizes numerous classical concerts in the church. A comprehensive restoration took place from 1963 to 1965. 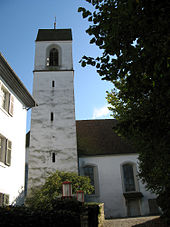 Tower of the old church

The oldest part of the church that has been preserved is the church tower, made of quarry stone masonry with corner blocks and a cheese bite roof, dating from the late 15th century . The bell chamber with its four two-part tracery windows , separated from the tower shaft by a narrow profile, no longer has any bells. The nave and the three-sixth choir are under the same ridge. Both sides of the building have four arched windows . In 1965, the wooden sign that was made two hundred years earlier was replaced by a canopy.

The interior, which today serves as a music and lecture hall, no longer has any church furnishings. The main altar, created by Johann Baptist Wickart in 1669 and renewed in 1734, and the southern side altar were sold in 1912; since then they have been in the parish church of Andiast . The choir arch has stucco work , including a coat of arms of Abbot Aegid von Waldkirch . The stucco work in the choir is the work of Andreas Tschanet, Wolfgang Tschanet and Joseph Anton Berchtold (1774). They consist of rocaille cartridges, while the coat of arms of Prince Abbot Bonaventura Bucher is placed in the choir arch .