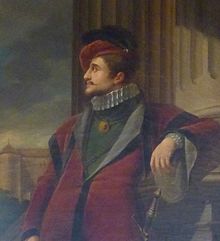 In 1514 he got the rule of Horburg , the town of Riquewihr (Reichenweier) and the castle and rule of Bilstein . In 1519 his older brother, Duke Ulrich , was expelled from Württemberg. Georg tried to support him by force of arms and had to go into exile in Strasbourg. On September 2, 1526, his brother Ulrich sold him the county of Mömpelgard with associated lordships in the form of a pseudo sale and subject to redemption.

In 1531, George joined the Protestant Schmalkaldic League against the Emperor Charles V to. With the help of the Hessian Landgrave Philip I , his brother Ulrich was able to regain power in Württemberg in 1534. Mömpelgard came back to Württemberg. In 1542 Ulrich's son Christoph became governor there.

When Christoph's son Ludwig died in 1593 without any descendants entitled to inherit, Georg's son Friedrich became Duke of Württemberg.