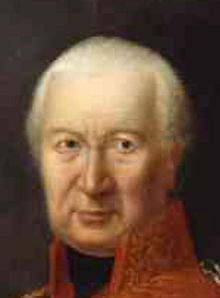 Friedrich Adolf was a member of the noble family von Kalckreuth and the son of Hans Ernst von Kalckreuth (1689–1739), Herr auf Trebitsch , electoral Saxon and royal Polish major in the Sachsen-Weißenfels regiment and his wife Charlotte Antonie, née von Bülow (1698 -1739).

Kalckreuth was educated from March 22, 1748 in the boarding school of the preacher Perrault in Berlin. On January 25, 1752, he joined the Guard Corps as a junker and was appointed cornet on July 15, 1753 . He participated in the campaign in 1756/63 and fought near Lobositz , Prague , Roßbach , Zorndorf , Hochkirch and Freiberg .

In the meantime he was promoted to second lieutenant on February 16, 1757 and appointed adjutant general to Prince Heinrich of Prussia on November 1, 1758 . For its services in Freiberg (29 October 1762) named him Frederick II. To Major .

Kalckreuth shared Heinrich's critical stance towards his brother Friedrich and was transferred to East Prussia in 1766 on the pretext of a relationship with Prince Heinrich's wife . King Friedrich Wilhelm II rehabilitated him in 1786, brought him back to the residence and made him count. During the expedition to Holland in 1787 , Kalckreuth showed himself to be a skilled troop leader; In 1790 he became lieutenant general .

Kalckreuth sympathized with the French Revolution and was an opponent of the alliance with Austria during the First Coalition War . Nevertheless, he proved to be a successful general in the campaign against France. In 1792 he managed by skillful negotiation with General Kellermann that the Prussian rearguard could withdraw unmolested. He later led the siege of Mainz , which he forced to surrender on July 23, 1793 . The terms of surrender were negotiated with François Ignace Ervoil d'Oyré and provided for an Honorable Surrender .

In the years that followed, he advocated an alliance with Napoleon, whom he admired. In the campaign of 1806 he led the second reserve division, which he rated as a reset. Kalckreuth did not agree with the war, criticized the army leadership and foresaw the catastrophe. He did so according to the rules that he was accused of having contributed significantly to the defeat he prophesied at the Battle of Auerstedt . On the retreat, Kalckreuth led the remnants of the army now under his command north around the Harz , but had to hand them over to Hohenlohe , who surrendered with them shortly after at Prenzlau . Kalckreuth had meanwhile taken over command in West and East Prussia . He later headed the defense of Danzig , but had to hand the fortress over to Marshal Lefebvre on May 24, 1807 after 76 days of siege . A surrender under the conditions of Mainz was agreed with him and he was able to withdraw with his troops to East Prussia. After the Battle of Friedland , Kalckreuth concluded the armistice at Tilsit on June 25 and signed the Tilsit Peace Treaty , which was followed on June 12 by a highly unfavorable agreement on its implementation. In these negotiations Kalckreuth had let himself be outplayed by his partner Louis-Alexandre Berthier , who flattered him and appealed to Kalckreuth to adore Napoleon.

For the valiant defense of Danzig he was appointed field marshal, then also governor of Königsberg in 1807 , of Berlin in 1809, of Breslau in 1812 and returned to Berlin as governor in 1814 . It no longer played a role in the Wars of Liberation . Kalckreuth belonged to the Frederician era, was devoted to rationalism and French culture, the emerging nationalism remained alien to him. He did not shy away from the public and expressed his views emphatically. Because of his many enemies he is judged differently. His last object of ridicule was the Teutonic -minded youth of the Wars of Liberation.

The Kalckreuthstrasse in Berlin-Schöneberg and Kaiserslautern (Morlautern) are named after him.

He found his final resting place in the south-west cemetery Stahnsdorf in the garrison and memorial grave, block Epiphany, field 1a.