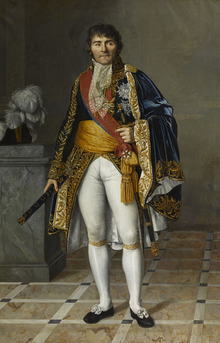 He was the son of a miller and captain of the city gates of Rouffach in Alsace, joined the Régiment des Gardes françaises in 1773 and married Catherine Hübscher (also known as Madame Sans-Gêne) in 1783 . The couple had 14 children, 12 of whom were sons. 1792 he was Capitaine on December 2, 1793 to Général de brigade in the Moselle Army, in January 1794 under General Hoche promoted to Général de division . In the fighting in the Habsburg Netherlands, he was in command of the avant-garde of the armies involved in the Vosges, Moselle and Sambre and Maas armies.

In the Battle of Fleurus he commanded the right wing of the center under the High Command of Jourdans . In June 1796, under the command of Kléber , he commanded the center of the left wing of the Sambre and Maas armies on the first campaign of the First Coalition War in Germany on the right bank of the Rhine. As the center in command in September 1796, he played a major role in the victory at Altenkirchen against an Austrian corps under Duke Ferdinand FA von Württemberg.

On March 13, 1798 he became governor of the Mainz fortress . That year he had various commandos in the Armée de Mayence , which was stationed in Wasgau , on the Saar and Moselle . 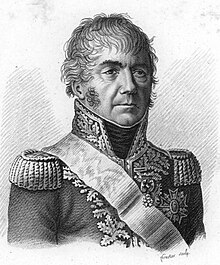 In 1799 he led an 8,000-strong corps in Jourdan's Danube Army , with which he fought against 30,000 Austrians at Stockach . Seriously wounded, he returned to Paris and was given supreme command of the Directorial Guard, at whose head he penetrated the Council of Five Hundred on 18 Brumaire (November 9, 1799) together with Leclerc and freed the threatened President Lucien Bonaparte . Bonaparte, to whom he was faithful, gave him the command of the 17th Military Division and appointed him praetor in the Senate in 1800 , which he retained until the Restoration . On May 19, 1804 appointed Marshal (Maréchal d'Empire), Lefèbvre commanded the infantry of the Imperial Guard near Jena in 1806 . After the Battle of Eylau , Napoleon put him in charge of the siege of Danzig and, after taking the city (May 26, 1807), made him Duke of Danzig (Duc de Dantzig).

In 1808 Lefebvre commanded the 5th Army Corps in Spain and won the battle of Durango on October 31 , took Bilbao and defeated the British army under Blake on the heights of Gueues on November 7 , and delivered the battle on November 11 and 12 Espinosa de los Monteros and took Segovia on December 3rd .

In 1809, as commander of the Bavarian army , he suppressed the uprising in Tyrol and took part in the battles near Eggmühl and Wagram . In 1812 he led the French guards. After the Allies entered France in 1814, Napoleon gave him command of the left wing of the army. After Lefèbvre had fought with distinction at Montmirail, Arcis sur Aube and Champeaubert, he submitted to the Bourbons after Napoleon's abdication and was elevated to a peerage on June 4, 1814. But since he had stood on Napoleon's side again during the reign of the Hundred Days , he lost the peerage at the second restoration. But Louis XVIII confirmed him . In 1816 again as Marshal , and on March 5, 1819, Lefèbvre also rejoined the Chamber of Peers .

His name is entered on the triumphal arch in Paris in the 3rd column.