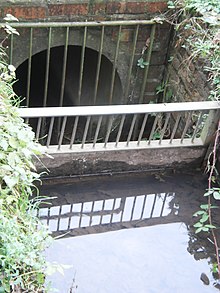 End of a ditch at the edge of the forest

In hydraulic engineering, piping refers to the laying of flowing water underground.

Piping means, on the one hand, laying in a pipeline in the true sense of the word, and, on the other hand, routing in a covered channel .

The guidance in the pipe is used for the hydraulic engineering of the watercourse and / or the drainage (drainage).

Pipework can be found both on very short stretches of watercourse , for example in penetrations under road and railroad embankments (in the sense of a simplified structural solution instead of a bridge ) as well as on long watercourse sections , for example in urban areas. This means that when it comes to piping, the terms of the sewer as an artificially created bed of water mix with that of the sewer system as a sewage system for surface water. Special forms of piping are, for example, the aqueduct (line bridge , there is also an uncovered version), the culvert (pressure line as an underpass, for example under another body of water) or the pressure pipeline with steep slopes (for example for water diversions as a feed in the area of hydropower plants ). Pipelines ( rock construction ) that run entirely through the rock are referred to as water tunnels .

Piping is the strongest building class of artificial or significantly anthropogenically modified bodies of water, and thus the most severe denaturation of a body of water.

In the past, a low-cost construction method was in the foreground for piping in the settlement area; for water development and improvement of the water quality, (partial) renaturation can reduce water morphological deficits such as piping.