from Wikipedia, the free encyclopedia
pd3

The Schneeberg is 1051  m above sea level. NHN the highest mountain in the Fichtelgebirge in northeast Bavaria and at the same time the highest mountain in Franconia and northern Bavaria. You can recognize him from afar by the former telecommunications tower of the Bundeswehr, a memorial to the Cold War . The summit area consists of a sea of ​​granite blocks and a rock castle on which the Backöfele observation tower stands. Military buildings shape the summit.

In terms of nature , it belongs to the main unit of the Hohes Fichtelgebirge (394). It is the highest peak in Upper Franconia .

The name Schneeberg was also interpreted as deriving from snede = border. It is more likely, however, that the long snowfall in the region gave it its name.

The rock group on the highest point is called Backöfele, the name carried over to the observation tower. In the Thirty Years War, the residents of the surrounding towns are said to have fled there and baked their bread there.

The mountain has always had a strategically important meaning because of its wide view. In 1498, Kunz von Wirsberg , captain of the mountain, was instructed by Margrave Friedrich to work out maintenance regulations . On various mountains of the Fichtelgebirge, including on the Schneeberg, waiting towers were built , which had to send fire or smoke signals to the neighboring waiting rooms in the event of danger. In 1520 the Weißenstadters had to set up a permanent guard there. In 1713 the remains of this observation tower were still visible. 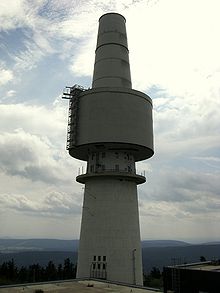 The telecommunications tower in August 2007

The Luftwaffe had a 35 meter high wooden tower built in 1938, the purpose of which was considered secret. In 1942 it burned down for "inexplicable reasons". On November 14, 1951, US forces requisitioned part of the summit and erected various buildings and steel structures for antennas and parabolic mirrors . In 1961, the Bundeswehr took over the area of ​​the summit adjacent to the north and had the telecommunications tower of Telecommunications Sector E built in 1963 , which began operations in 1967. The mountain top was a restricted military area, the baking oven was now "locked in". After the end of the Cold War , the US armed forces left Schneeberg on April 30, 1992, and on March 31, 1993 the German armed forces ceased their military reconnaissance operations. The last soldier left the Schneeberg air defense position on June 30, 1994, and the property was transferred to the Federal Property Administration . The former Bundeswehr tower was leased to the Mannesmann company (now Vodafone ) for mobile communication purposes .

On December 29, 1995, the district of Wunsiedel, on the initiative of District Administrator Peter Seißer, acquired a 6500 m² area in the former American restricted area, on which the baking oven is also located. Renaturation measures were carried out in cooperation with the Fichtelgebirge Nature Park . Since August 29, 1996, there has been free access to the Backöfele observation tower again. In the course of the renaturation measures, the old mountain rescue refuge in Weißenstadt was demolished, although the Fichtelgebirge Nature Park had given a few days earlier that it wanted to keep this hut for hikers and mountain rescue services. Thereupon the Weißenstadt readiness built a new refuge below the summit area.

In 2010 the former Bundeswehr tower was placed under monument protection due to its historical significance.

Since June 2013, the Federal Real Estate Agency has offered the former military site with the telecommunications tower for sale. It was acquired by the Wunsiedel public utility company in September 2014.

Due to the low average temperature of 3.7 ° C, an Ice Age plant community can still be found in the summit region of the Schneeberg . The green areas must not be walked on as the plants are extremely sensitive to footsteps. Below the summit region there is one of the last German non-alpine capercaillie populations , which is also classified as in need of protection, since capercaillie is very prone to failure. Winter tracks that have been found repeatedly bear witness to the return of the lynx to the high Fichtel Mountains around the Schneeberg.

The Schneeberg represents the easternmost area in the river system of the Rhine . To the southeast, the Seehausbrunnen is a possible source of the White Main . Usually, however , the Weißmainquelle is indicated near the Ochsenkopf , four kilometers away .

The paved road to the Schneeberg summit is closed to public traffic. However, the summit can be reached via several hiking trails. Possible starting points are Bischofsgrün , Weißenstadt , Meierhof (Weißenstadt), Vordorfermühle , Leupoldsdorferhammer , Silberhaus (Tröstau) and the Seehaus car park on the B 303 / E 48. The entrances are between five and eight kilometers long. The Franconian Mountain Trail runs over the Schneeberg summit as the highest elevation on the long-distance hiking trail.

Nature reserves in the district of Wunsiedel in the Fichtel Mountains