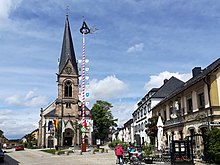 Bischofsgrün is a municipality in the Upper Franconian district of Bayreuth .

Bischofsgrün is located between Ochsenkopf and Schneeberg in the high valley of the White Main in the Fichtelgebirge on federal highway 303 . The Karchesweiher lies in the southeast .

The only directly adjacent neighboring municipality is Gefrees .

There are 15 officially named parts of the municipality (the type of place is given in brackets ):

Unfortunately, there is no evidence for the earliest dates in the history of Bischofsgrün. The town of Bischofesgrune is mentioned in a document from Bamberg's bishop Otto from 1242 , but in that year Bishop Heinrich I ruled Bamberg. A bishop Otto is not recorded for this time. A parish church is said to have existed on the site of today's church as early as 1204, which indicates a larger settlement, but there is only one reference to this from a Protestant pastor from the 19th century. According to old records, which are not historically documented, a glassworks is said to have been here around 900. The first reliable findings are from the year 1317, when the Counts of Hirschberg received the Rudolfstein together with the surrounding villages (including Bischofsgrün) as a fiefdom from Emperor Ludwig the Bavarian . In 1340 a "glassmaking" was first mentioned. The rule of the Lords of Hirschberg came to the Burgraves of Nuremberg in 1360, who later became the Margraves of Brandenburg-Bayreuth. The tin mining at Ochsenkopf is mentioned by Italian experts for 1421; reported from a glassworks for 1536. At that time the place had 39 houses. In 1616 members of the Greiner family of glassmakers bought the burned down glassworks and led it to a new bloom. In 1473 Bischofsgrün passed to the Margraves of Brandenburg-Kulmbach. In 1496 the existence of a first church is documented, the Catharinenkapelle, which was probably built in the 11th century. From 1500 on, Bischofsgrün was in the Franconian Empire . Due to its remote location, Bischofsgrün was spared the Hussite Wars 1419–1434, the Peasant Wars 1525 and the Religious Wars from 1552 to 1555.

In 1536 the Reformation was introduced in Bischofsgrün and the Catholic Aegidia Church was evangelical. From 1604 Bischofsgrün belonged to the Oberland of the Principality of Bayreuth . On May 16, 1612 a major fire devastated the place with the church and a new church was built. A second glassworks was built in 1682 and Bischofsgrün became known for its hollow glass production. In 1699 the damaged Aegidien Church was demolished and rebuilt as the St. Matthew Church by 1702. At that time, Bischofsgrün had between 400 and 500 inhabitants.

During the Seven Years' War , epidemics were brought in by soldiers, so that the upward development of the place was interrupted by numerous deaths. In 1791, Bischofsgrün was sold to Prussia by Margrave Christian Friedrich Karl Alexander as part of the Hohenzollern principality of Bayreuth, which had become Prussian in 1792 . In 1807 the area was sold to the French during the Napoleonic Wars in the Peace of Tilsit and in 1810 by Napoleon to the Kingdom of Bavaria. In the course of the administrative reforms, today's community of Bischofsgrün was created with the community edict of 1818 .

On September 18, 1887, almost the whole place was destroyed in a major fire, only four stone houses and the schoolhouse remained. The place was rebuilt and in 1892 the St. Matthew's Church, built in neo-Gothic style, was inaugurated.

In 1898 Bischofsgrün was connected to the Bavarian railway network and tourism began on the Ochsenkopf and in Bischofsgrün. Bischofsgrün has been a tourist destination since the beginning of the 20th century with numerous ski slopes and a ski school. The first ski club was founded in 1909 and a ski jump was built in 1957. In 1958 it was officially recognized as a climatic health resort. The number of overnight stays rose from 50,000 in 1952 to almost 250,000 in 1972. The peak of tourism was reached in 1991 with over 326,000 overnight stays. The community of Bischofsgrün has been the sponsor community of GSG 9 of the Federal Police since 1975 . The sponsorship is maintained through mutual visits and joint events. In 1976, Wülfersreuth was incorporated as part of the regional reform . The railway line to Bayreuth was closed in 1982. Bischofsgrün has been a climatic health resort since 1992 ; In 1995 it was named a “small center” in the Bavarian regional plan.

The Protestant parish of Bischofsgrün St. Matthäus belongs to the dean's office in Bad Berneck and has around 1500 members. The neo-Gothic St. Matthew's Church from 1892 serves as a place of worship. The parish also looks after the kindergarten in Bischofsgrün.

The Catholic Christians are looked after from the parish of Oberwarmensteinach; Masses take place in the Church of the Assumption of Mary in Bischofsgrün. Bischofsgrün belongs to the Kemnath-Wunsiedel deanery in the diocese of Regensburg.

The responsible parish for Old Catholics is in Weidenberg.

On January 1, 1976, the previously independent community of Wülfersreuth (until 1875 Wilfersreuth) was incorporated, which is 703  m above sea level. NHN is the highest village in Upper Franconia.

As in large parts of Eastern Upper Franconia, the population in Bischofsgrün is declining. The small number of young people is noticeable, so that the demographic problem will only increase in the future. In 2011, 386 citizens were registered as having a second residence in Bischofsgrün.

Michael Schreier (SPD) has been mayor since May 2020. His predecessor was Stephan Unglaub (SPD) since November 2003. In 2014, he was re-elected with 95% of the votes without an opponent.

The Ochsenkopfschanze, which was reopened on August 1st 2007 on the hill cliff above the village, has increased the sporting importance of Bischofsgrün. Every year the international women's elite attend a summer jumping competition of the FIS and the national teams of the special and combined jumpers of the German Ski Association (DSV) to prepare for the season. Alpine winter sports are also possible. In 2007, the north run of the Ochsenkopf (length 2.3 km) was equipped with a snow-making system, and two tow lifts are floodlit. A ski school offers courses for skiing and snowboarding. When the snow conditions are appropriate, cross-country trails are groomed around Bischofsgrün. Large numbers of winter hiking trails are available. Guided snowshoe hikes are offered regularly. Equipment for all winter sports can be rented in two shops. Ice skating and curling is possible on the ice rink at the north valley station of the Ochsenkopf under supervision and under floodlights. 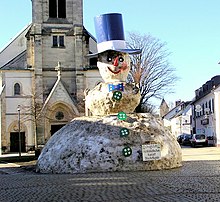 The Snowman Festival is traditionally celebrated every year on Rose Monday. Since the weather was too bad for skiing in 1985, the Bischofsgrüner ski instructor Horst Heidenreich and a couple of friends had the idea of ​​building a big snowman on the market square in front of the Evangelical Church in Bischofsgrün. The first snowman Jakob was about three meters high. In 2015, a new record was set with a height of 12.65 meters and a circumference of around 29.80 meters. Two years later it was smaller again, but at 10.24 m as high as the Ochsenkopf , the Bischofsgrüner local mountain, on a scale of 1: 100. To do this, it even had to be shortened by a few centimeters at the end.

Natural snow is used for construction. The Snowman Festival is celebrated with a pageant with brass music, gunmen , live music, open-air disco and a Jakob Snowman beer brewed for the occasion.

In 1998, according to official statistics, there were no employees at the place of work in the manufacturing sector and 54 in the trade and transport sector. In other economic sectors 427 people were employed at the place of work subject to social security contributions. There were a total of 677 employees at the place of residence subject to social security contributions. There were seven companies in the manufacturing sector and one company in the main construction sector. In addition, in 1999 there were 14 farms with an agricultural area of ​​215 hectares, of which 72 hectares were arable land and 143 hectares were permanent green space. The main line of business is year-round tourism. The largest employers are located in the tourism, spa, health and care sectors, namely the high altitude clinic of the German Pension Insurance and the Bischofsgrün care center, which is known throughout Germany due to innovative concepts in the field of elderly care .

There are the following institutions (status: 2013):

Municipalities in the district of Bayreuth