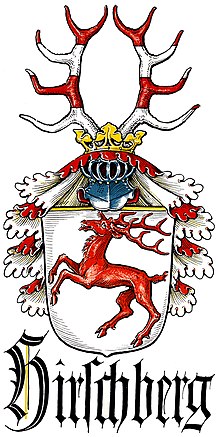 Hirschberg is the name of an old Bavarian aristocratic family from which initially Vohburg and later Andechs-Meran Ministeriale came from.

The family, belonging to the Frankish imperial knighthood, appears for the first time in a document on October 12, 1223 with Rudegerus de Hirzperc in a deed of foundation by Otto VII of Andechs-Meranien.

The Hirschberg in Vogtland had numerous possessions in the so-called Regnitzland , including in what is now the Hof district in Upper Franconia . They were named, for example, on the Rudolfstein , the Hirschstein , the Grünstein , the residences in Schwarzenbach an der Saale with Oberhof and Unterhof or Seuckenreuth and with a tower hill system in 1400 in Stobersreuth . After losing their sovereignty, they functioned as Hohenzollern bailiffs on the Rudolfstein . The two family members Agnes von Hirschberg and Amalie von Hirschberg († 1564) were abbesses of the Poor Clare Monastery .

A distinction is made between two lines:

During the Thirty Years' War Wolf Adam von Hirschberg lived on Ebnath and Schwarzenreuth (* 1614). He was notorious for his trade of honor . So on “4. February 1639, Georg Friedrich Zweiffel near Tirschnitz in a duel with a pistol shot off his horse and shot to death ”, which earned him a heavy fine. Through his participation as a freerider on the Bavarian side , he received a partial pardon. In 1671 he had to leave the country because of a similar incident, as a dispute was pending "because of the shot shepherd Hans Hauer zu Kastl". His first wife died in 1687 and he remarried in 1690 at the age of 76. In the death register it says about him: “On June 6th, 1694, the prominent and strict Mr. Wolf Adam von Hirschberg died in Schwarzenreuth - provided with the sacraments of death - 80 years old - winner in many duels ... He intends to use forbidden arts of resistance to cutting and stabbing Sworn off receiving the sacrament of penance ”.

On March 27, 1798, Franz Amand von Hirschberg (* 1771) married the heiress Katharina von Hann in the Wildenau castle chapel . This estate is still owned by the Hirschbergers to this day. After his death, the estate passed to his son Anton Ignaz (* 1811), who was the master of Wildenau until 1881. During this period, Hofmark Ebnath was sold, which was acquired by the Counts of Castell-Rüdenhausen in 1870 and later passed to Forst Ebnath AG. With the proceeds from the sale, the son of Anton Ignaz, Hermann I, who took over the inheritance in 1881, was able to finance the reconstruction of Unterwildenau after the devastating fire of 1887. He remained in charge of Wildenau Castle until 1919. After that, Hermann II. Von Hirschberg († 1939), who had returned from the First World War, magistral knight of the sovereign Order of Malta , could take over the property and keep it for his daughter Maria Katharina. In his second marriage he was married to Elisabeth von Wenz zu Niederlahnstein, after whose death († 1971) the property passed to the daughter Maria Katharina Döpper-von Hirschberg.

In 1381 Schwarzenbach Castle (on the Saale) with various areas on the Kornberg and the Förbau manor came into the possession of the Imperial Knights von Hirschberg, who stayed there until their decline in 1570.

Carl Heinrich Freiherr von Hirschberg, Chamberlain and State Director of the Grand Duke of Würzburg , was re-registered to the Baron Class in the Kingdom of Bavaria on July 17, 1815 .