The Ochsenkopf between Warmensteinach , Fichtelberg and Bischofsgrün in the Upper Franconian district of Bayreuth is 1024  m above sea level. NHN the second highest mountain in the Fichtelgebirge .

In terms of nature , it belongs to the main unit of the Hohes Fichtelgebirge (394).

Just a little to the east of this mountain, above the village of Fichtelberg , the White Main rises as the right or northern source river of the Main and the Fichtelnaab , one of the source rivers of the Naab . This is exactly where the European watershed runs . The Naab flows south towards the Danube, the Main flows west towards the Rhine.

On the summit is the managed Asenturm as a lookout tower and a transmission tower for VHF, digital radio and digital television programs of the Bavarian radio .

A chairlift leads to the Ochsenkopf from the south and north . The valley stations are located in the north in the village of Bischofsgrün and in the south in Fleckl, a district of the municipality of Warmensteinach .

In winter, skiing is practiced at the Ochsenkopf . In summer the bike park and the summer toboggan runs can be used. These lifts, each a stainless steel tub lift and a rail-guided Alpine coaster with an uphill lifter, can be reached from the north valley station. There has also been a climbing forest there since July 2007 and a zipline park for individuals and groups since 2011.

The name Ochsenkopf does not appear in old descriptions of the mountains. The first person to describe the Fichtelgebirge, Matthias von Kemnath (actually Matthias Widmann, born February 23, 1429 in Kemnath ), reported in 1476: "A bergk, hoch, weitt, wolbekant ligt in Beiern, gnant der Fichtelberg". In the border descriptions in 1499 and 1536 the mountain was called "Vichtelberg", the name already designating the entire mountain range. Around 1317 the Lords of Hirschberg received the "walt zu dem Vythenberge" as a fief. As early as the 14th century, iron was found in the “St. Veith ”won at the southern foot of the Ochsenkopf (Vyth → Veit → Fichtel). Home and name researchers have not yet spoken the last word on this. The name Ochsenkopf appears in mining files for the first time in 1495, when Lorenz von Ploben from Nuremberg received the mine on the Fichtelberge "near the Ochsenkopf" as a fief. That should be a reference to the bull's head carved into a rock on the mountain top, which can still be seen.

Rock drawing of the ox head

In 1878, when the Fichtelgebirg section of the German-Austrian Alpine Club (predecessor of the Fichtelgebirgsverein ) was founded, there was already a lookout tower on the Ochsenkopf, a wooden scaffolding used for national surveying. In 1876 a stone surveying column was erected there ( Saxon surveying pillar , still in place today) and surrounded by a wooden frame. Later this scaffolding was prepared as a lookout tower and raised a little, but in 1894 the construction was "very shaky", it is reported. The Fichtelgebirgsverein (FGV) kept improving this structure. Forester List from Bischofsgrün had the tower rebuilt in 1896 and raised by ten meters.

On December 21, 1902, the FGV local group in Bischofsgrün applied to the FGV main association for the construction of a solid stone tower and transferred a base of 230 marks as the first installment. The decision was made to build a tower, but years passed before the project was realized, as the First World War initially destroyed all plans. It was not until 1922 that the FGV general assembly took up the previous resolution to build the tower again and decided that the local FGV groups involved had to provide the documents for a new building as “as quickly as possible”.

In the meantime, on May 14, 1922, the plans by Bayreuth architect Hans Reissinger were presented, which met with great approval. Obtaining the necessary funds turned out to be difficult; despite the onset of inflation, the decision was made to raise funds among the local FGV groups. The chronicler wrote at the time: "What use were all these paper notes that became worthless in the course of days and later even hours". Despite all the difficulties, the Häffner & Keil company from Bayreuth started building the tower in 1922, and when money was running out, it was the FGV members who helped to build the tower.

They were housed in Grassemann and Fichtelberg and went to their place of work on the mountain top every day. The Bischofsgrüner schools also put themselves at the service of the cause, with schoolchildren transporting building materials to the mountain top with rucksacks. Construction activity ceased in the winter months; it was resumed in May 1923 and when the FGV was again faced with empty coffers, members of the FGV local groups in Hof, Bayreuth, Bischofsgrün, Fichtelberg, Münchberg and Schwarzenbach packed up. On August 26, 1923, the Asenturm with its small renovation was ceremoniously opened to the public as an economic space. 5,000 people, some of them with special trains, came from all directions to the summit of the Ochsenkopfes. Fanfares sounded and "core German" speeches were given, as the chronicler reports. The expenditure for the tower construction amounted to 2.5 billion marks.

Apparently there were initially difficulties in finding a name for the observation tower, because various FGV local groups resisted the name Bayreuth Tower , which was brought up for discussion. There were also different opinions regarding the motto for the stone tablet on the tower, that was the opinion that it should have content for all time. Professor Ludwig Hacker from Wunsiedel had suggested the following slogan: "The Asenturm defies weather and storm, do the same to it, my German Empire!". This proposal was discussed lively in the FGV main committee at the time. Proponents believed that the ox head had always been a sacred mountain where the sir , the Germanic deities, lived. Opponents of the name pointed out that there was no indication that a Germanic culture could be proven here, which is why the name Asenturm should be rejected. After a fight vote, Hacker's motto was accepted with 12 against 4 votes.

Establishment of the national survey

The summit of the Ochsenkopfes has always played an important role in geographic surveys. The first more precise measurements in the Fichtelgebirge were made during the reign of Bayreuth Margrave Friedrich , who ruled from 1735 to 1763. The famous French cartographer and director of the observatory in Paris , César François Cassini de Thury , stayed in Bayreuth in 1761 and carried out so-called triangular measurements in the vicinity of the royal seat. He too chose the ox head as a trigonometric starting point. The margrave personally accompanied the scholar to the mountain summit and was interested in working with the measuring instruments. The Fichtelgebirgsverein commemorates this distinguished visitor with a stone sign on the Asenturm with the inscription “Margrave Friedrich stayed here in 1761 with the scholar Cassini”. The survey documents are in the State Archives.

From the notes of the pastor Heinrich Scherber in his book Umsichten auf den Ochsenkopf, it emerges that Bernhard von Lindenau from the Gotha observatory set up measuring instruments on a free-standing rock wall on the Ochsenkopf in October 1808. He also had a trigonometric symbol built in the form of a wooden pyramid, which, incidentally, was also used as the first observation tower . In addition to grade measurements, von Lindau also carried out height measurements and contributed significantly to the knowledge of the Fichtelgebirge through his scientific publications. For the exact location of the instrument, a cross and arrows were carved into a rock in 1810, and in 1850 the letters HDNP for main triangular network point were added above the cross . The rock carvings can still be seen clearly. In 1876 the royal Saxon land surveying under the direction of Professor Nagel erected a stone pillar in the shape of an obelisk near the HDNP, which was used for the purposes of European grade measurement . Since the Saxon government was responsible for the construction and financing of this pillar, it went down in history as the Saxon surveying pillar . The obelisk that is still visible is the rest of the pillar, which was originally much higher.

The green ox-head proterobas is a hard rock. The Permian duct rock is a lamprophyre that occurs between Bischofsgrün and Fichtelberg . It runs through the Ochsenkopf as a corridor with a length of about 8 km and a width of 5 to 30 meters in a southeast-northwest direction. Like granite, this natural stone is weather-resistant and can be polished. In the Third Reich it was preferred by Arno Breker , Fritz Klimsch , Josef Thorak and Artur Sansoni for stone carving work, because it looks like granite but does not reach its hardness. This stone was also used in construction for floor and stair coverings, wall panels, walls and curbs.

Since the 15th century Proterobas has been melted into glass buttons and hollow glasses. During archaeological excavations it was found that the stone material was melted in a glassworks in the Wolfslohe forest area at 1300 ° C from the middle of the 17th century and processed into black glass buttons and glass beads at 700 to 1000 ° C. In the late 17th century, the so-called ox-head glasses were made in Bischofsgrün. 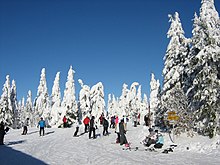 Skiers at the Ochsenkopf summit

A first chairlift led from Warmensteinach to the Ochsenkopf since 1969. As a result, the cross-country skiing, ski jumping and Nordic combined competitions of the German university championships for skiers were to be held there in early 1970.