from Wikipedia, the free encyclopedia
This is the spotted version , flagged on July 24, 2020 . There is 1 pending change that has yet to be viewed. 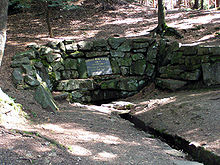 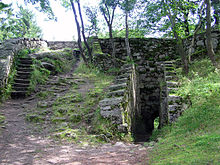 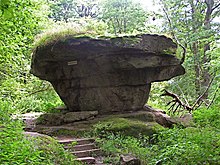 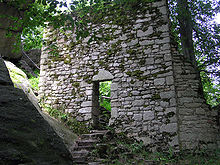 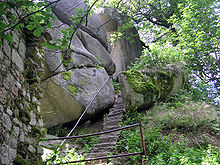 Rise to the bowl 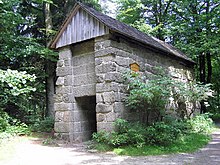 final ascent of the great Waldstein

The Great Waldstein ( 877  m above sea  level ) is the highest elevation of the Waldstein range in the northern Fichtelgebirge Horseshoe . It is best known for its rocks in wool sack weathering , its castle ruins and the only surviving bear trap in the region. The Zellerfels (772 m) forms one of these typical rock formations on the southwest slope . Not far from here, the Saxon Saale rises and flows northwards past Zell in the Fichtelgebirge .

In the summit area there is mixed forest with old beech trees and mighty rock towers; the entire area is a nature reserve (20.2 ha). Marked hiking trails lead to the mountain from all directions; From Weißenstadt and Sparneck , the accommodation facility of the Fichtelgebirgsverein , the Waldsteinhaus , can be reached on public roads. From there you can take a walk through the summit area. The Jean-Paul-Weg also touches the Großer Waldstein. The Franconian Stone Kingdom quality hiking trail begins there.

The summit ridge is designated as Geotope 475R009 by the Bavarian State Office for the Environment . The Arnstein rock is also a geotope.

See list of geotopes in the district of Hof

To the east of the Waldsteinhaus rises a mighty rock face on which the remains of the once mighty Veste Waldstein are enthroned. Today this castle is often referred to as the Red Castle , as it was assumed for a long time that the Palas had been covered with red tiles since it was built in the 14th century. Rather, the name Red Castle comes from the fact that parts of the castle ruins at that time were covered with red bricks during the War of the Spanish Succession (1701–1714) in order to build a warehouse there. Remnants of these bricks can still be found around the castle. The name Red Castle is the invention of the Hof school director Helfrecht , who first named the complex in his work published in 1795, because he believed that the castle had always been covered with red tiles. Since almost all later researchers oriented themselves to it, the term was naturalized. Only Karl Dietel did away with this false assumption in his work The Great Waldstein in the Fichtel Mountains . Through the castle gate, stone steps lead to the inner courtyard, which used to be used for various buildings (gatehouse, residential tower, cistern ). The castle was built in the 14th century by the Lords of Sparneck and destroyed by the Swabian Confederation in midsummer 1523 (see also Wandereisen woodcuts from 1523 ). At times it was forbidden to enter the Red Castle, as there was an acute danger of collapse. After the restoration in 2008, the ruins can be viewed from the inside again.

In front of the castle gate there is a mighty boulder with an oval plate that widens upwards, the legendary devil's table. On the slab of this peculiar rock massif you can still see deep holes that, according to legend, come from iron cards with which the devil played with goblins and ghosts. In reality, these holes could be traces of a pavilion that was demolished in the late 19th century. The only evidence of this is a work by the copper engraver Gerd Könitzer, who made several engravings of the Waldstein summit with the buildings in the middle of the 19th century.

In front of the stairway to the Schüssel observation pavilion, the remains of the walls of a late Romanesque chapel belonging to the east castle can be seen. At the northeastern foot of the bowl rock are the remains of the wall of the east castle, which was built around 1100 and abandoned around 1300 because of the construction of the new western castle. The walls of the former keep can still be seen on the bowl rock. During excavations, several Stone Age microblades, scrapers and pierced pendant fragments made from Jura chimney, which does not occur in the Fichtel Mountains, were found. It is therefore assumed that the Waldstein summit was a Stone Age resting place. Shards of vessels and metal objects that came to light also show that fortifications existed between the 8th and 10th centuries.

The former chapel on the Waldstein summit was built together with the east castle. It was decorated with smaller wall paintings and stained glass windows and housed an altar next to a holiest chamber. It was not abandoned with the Ostburg after the western castle was built, but maintained from Weißenstadt for a good 200 years . Even some kind of church festival was held there. The chapel was probably not destroyed until the Hussite storm in 1430. During his excavations in the 1960s, Karl Dietel found a so-called votive cattle in addition to many Stone Age tools. It is believed that this cattle was sacrificed to God to protect the cows. This assumption is supported by the fact that the church was consecrated to St. Wolfgang, the protector of cattle. The discovery of four graves was also interesting, one of which was empty, while the others contained the skeletons of a man, a woman and a child. A skeleton, the legs of which were missing, had traces of a sharp object above the pelvic bone. Dietel suspected that when the chapel was expanded, the skeleton had been dug up and parts of it had been removed.

A cauldron-like depression on the highest rock of the Großer Waldstein, to which a climbing facility leads, once gave the rock its name. This name carried over to the observation pavilion, which was built by the forest ranger in 1851 when King Maximilian II of Bavaria announced his visit, but did not come to Waldstein due to lack of time. The pavilion was originally painted with blue and white diamonds, the openings were glazed. The painting and the glass panes, of which nothing can be seen, fell victim to the weather.

The Waldsteinhaus is a year-round managed accommodation facility of the Fichtelgebirgsverein in the immediate vicinity of the summit of the Großer Waldstein at an altitude of 855  m above sea level. NN .

A hydraulic ram invented by the Montgolfier brothers has been pumping water onto the Waldstein for over 60 years without failures. It is noteworthy that it manages this without any motor or pump, but only works with the power of the incoming water. It is located about one kilometer to the west and about 300 meters below the Waldsteinhaus.

The groundbreaking ceremony for the transmitter on the Großer Waldstein took place in October 1960. In May 1961, the system built by what was then the Deutsche Bundespost, whose main task was to broadcast the ZDF program in northeast Bavaria, went into operation.

Nature reserves in the district of Hof