Principle of the level level

Artfully decorated set level from Riedlingen an der Donau, around 1730 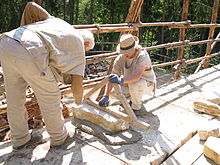 The setting scale is a historical precursor of the spirit level and typically consists of an isosceles triangle strips, at the tip lot is suspended.

Application and historical use

A surface checked with the level is horizontal if the tip of the plumb line touches a mark placed in the center of the base of the triangle.

The level can only be used in this form for measurements of the horizontal .

According to research, the builders of the pyramids in Egypt were already familiar with the level. Roman builders used the level next to the Chorobates , also a forerunner of the spirit level, to establish a horizontal line . Leveling scales were still offered for sale in specialist shops at the beginning of the 20th century, and in general they were made by the builders themselves.

Instead of an equilateral triangle made of wooden strips, an isosceles triangular board was also used. Level scales made of strips in the shape of the letter “A” were also used, with the indicating part being the plumb line that played on a mark on the cross line of the A-figure. Another variant is an inverted “T” shape bar construction. The display principle is the same for all of these forms.