A letter scale is a device used to measure the weight of letters. 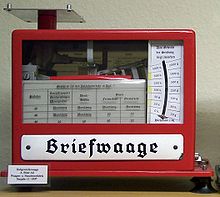 Lifting weight scales as found in German post offices. These scales are from the time of the Third Reich. 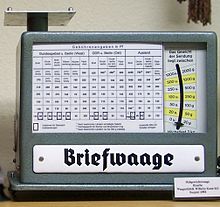 Lifting weight scale from the 1950s. 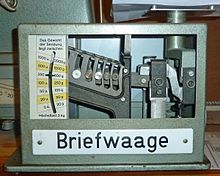 Lifting weight scale with a view of the interior. 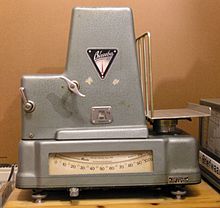 With the British postal reform of 1839, in which the fees for mail delivery were changed from the distance to the weight of the respective letter, it became necessary to determine the weight of the letters using letter scales .

Since nothing comparable was available, the English businessmen tried to create the simplest possible devices for everyday use, with the help of which the weight of a letter could be determined.

On October 22, 1839, the postal reformer Rowland Hill wrote in his diary that the Treasury Secretary had commissioned him to develop a machine with which it would be possible to determine the weight of letters. Of course, this should be done at a moderate cost.

Shortly thereafter, Rowland Hill's brother Edwin, who had an inventive streak, had designed such a machine so that the plans could be presented to the Treasury Secretary on October 26th. After discussions with postal workers, Edwin Hill was able to accept the order to build about thirty to forty such scales. However, this patent then disappears and is only brought to the public once again through an invoice that William Mary de Grave & Son provides for eleven scales on January 5, 1840.

Of course, these scales were much more interesting for merchants and private individuals than for the post office itself. A number of balance manufacturers at that time brought corresponding products onto the market that were suitable for home and office use.

One of the first manufacturers was the publicist and postal reformer Henry Hooper. As early as August 1839, Hooper had, with foresight, applied for a patent for a letter scale. The scales were rated up to a total of 4 ounces and had markings for 1/2 ounce, 1 ounce, 2 and 3 ounces, respectively.

Other suggestions followed, but most were quite expensive. The candlestick letter scales from Robert Winfield from Birmingham could then be offered a little cheaper. It consisted of a central cylinder in which the spring was housed. There was a nozzle with a circular metal disc on it. A vertical viewing window indicated weights from 0 to 4 ounces.

A letter scale manufactured by Ratcliff was registered as patent no. On February 12, 1840 by Robert Willis, a Cambridge University professor . 8384 has been registered. It consisted of a piece of metal on a mahogany base. Although no weights were displayed here, the respective fee level could be determined by inserting metal parts well beyond the 4-5 ounces.

These constructions show the broad response and acceptance of the new fee setting. They also found their way into homes and offices. At the same time, the postal reform developed.