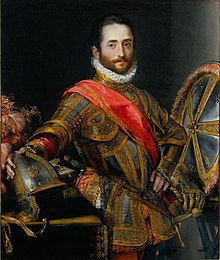 Francesco Maria II was the son of Duke Guidobaldos II of Urbino and Princess Vittoria Farneses of Parma . He was educated at the court of Philip II of Spain from 1565 to 1568 and succeeded his father on the throne after his death in 1574. In 1580, due to the financial situation of his house, he had to rule over the Duchy of Sora and Arce to Giacomo Boncompagni , the legitimate son of Pope Gregory XIII. , sell for 100,000 gold scudi . In 1585 Philip II awarded him the Order of the Golden Fleece .

Since no further heirs were expected, Francesco Maria II handed over the Duchy of Urbino to Pope Urban VIII in 1625 , after his death in 1631 Urbino finally fell to the Papal States. His granddaughter Vittoria della Rovere , the last of the main line of the family, inherited the art collection and had it taken to the Uffizi .