It is located directly to the west of the Lido and houses a monastery which, as the motherhouse of the Mechitarist Order, has made the island one of the world's most important centers of Armenian culture. 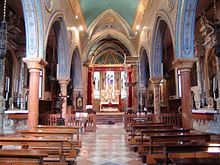 Originally the island served as a hospital for lepers . When the epidemic was pushed back at the end of the 15th century, the Dominican Order came to the island and stayed there for about a hundred years. After two centuries in which the island was uninhabited, some Armenian monks settled there in 1717. Mechitar von Sebasteia and 17 other monks founded their monastery there and expanded the island in the northwest to its present size of around three hectares. The 2001 census shows 22 permanent residents on the island, all in the main town of the same name.

The reception of the Armenian monks bore fruit for the cultural life of the city of Venice. The monastery has a large library comprising 200,000 volumes with an important collection of oriental, especially Armenian manuscripts, which has around 4,000 volumes.

Recordings by the flautist James Newton give an acoustic impression of the church .