The Lido di Venezia (from Latin litus = beach , coast ) is the middle part of a spit in front of Venice , which extends from Chioggia to Jesolo and separates the Venice lagoon from the open Adriatic Sea . In the 19th century it developed into a fashionable seaside resort with luxurious hotels. As the setting for Thomas Mann's novella Death in Venice , it found its way into literature.

The Lido is the venue for the annual Venice International Film Festival .

Together with the islands of Pellestrina and Sottomarina to the south and the Cavallino headland to the north, Lido forms the outer boundary of the Venice lagoon. The 11 km long island has an area of ​​4 km². For the 2001 census, 17,848 permanent residents were recorded on the island, of which 16,843 in the main town Lido and 620 in Alberoni . As of June 25, 2010, the population was 17,346.

The "Grand Hotel Excelsior", one of the classic hotels on the Lido

The main town and by far the largest place Lido, the venue for the film festival, for which a large new building is currently being built, is in the north, as is the “Grand Hotel des Bains” (setting for Thomas Mann's death in Venice ), Venice’s Casino and the “Grand Hotel Excelsior ” .

The second largest town with 620 inhabitants (2001), Alberoni, is located at the southern end. Alberoni is a small settlement at the foot of a large forest and nature reserve, there is also a golf course.

Malamocco , in the middle, was the first and for a long time the only settlement. The Doge of Venice resided in Malamocco before he moved in the 9th century to today's Venice, which was hardly populated until then. For the 2001 census it is no longer recorded as a separate location.

South of the island; Malamocco

At least half of the Adriatic side of the island consists of sandy beaches, both private (more in the north at the level of the large hotels) and public. The rest of the coastline is paved with large Istrian stones , the Murazzi . During the time of the Republic of Venice, these were shipped across the Adriatic Sea and piled up on the coast together with numerous sole to protect them from erosion . The Adriatic Sea is quite clean and warm. The beaches are the most important seaside resorts for Venetians and tourists, as the other islands with beaches are either difficult to reach ( Pellestrina ) or not so closely connected to Venice ( Jesolo , as a peninsula part of the mainland).

The heart of the island is the Gran Viale Santa Maria Elisabetta , a wide road about 700 meters long, which leads from the lagoon on one side to the sea on the other. It houses hotels, shops and restaurants. The island seldom becomes wider than at this point, which is why it forms the natural boundary between the lagoon and the Adriatic Sea as a long, narrow strip of land together with the Jesolo and Pellestrina peninsulas .

In late antiquity the island was called Lido Bovense, in the early Middle Ages it was called Lido di San Nicolò . There was one of the passages from the Adriatic to the Venice lagoon . In the north of the island there was a Benedictine abbey consecrated to St. Nicholas from around 1053 and a small Jewish cemetery from 1389.

In 1070 the Doge Domenico I. Contarini was buried in the church of San Nicolò di Lido . Pope Alexander III landed in 1177. accompanied by Norman ships at the Lido. In 1202 the Republic of Venice used the area to arrest thousands of crusaders who failed to pay their debts related to the Fourth Crusade . They waited there for the crossing, which began on October 10, 1202. In 1244 the Ghibelline Salinguerra II Torelli was buried in the church .

On June 11, 1412 a Hungarian fleet landed on the Lido, but the Hungarians were defeated on June 24 in the battle of Motta di Livenza.

Between September 1 and March 31, pilots were taken on board in Istria, whose highly specialized stand consisted exclusively of Venetians. They were referred to as the Great Pilots , of which there were only thirteen in 1458. They led the ships through the lagoon, which was difficult to navigate with its shallows. With the pilots on board, S. Nicolò di Lido, which was the main port until the 16th century, was first approached, where there was a control station next to a lighthouse.

Until the 19th century the island was only sparsely populated, a village had emerged around the church of Santa Maria Elisabetta. In 1855, the first public bath in Europe was built here, the place became known as Der Lido and at the end of the 19th century it became the epitome of beach and bathing operations. In 1857 Giovanni Busetto began using the beach for commercial purposes. In 1872, the Società Bagni del Lido, founded that year, took over the management of the baths. In 1871 the construction work for the Porto di Lido, the port, was approved, but it did not begin until 1882. This year the vaporetti also drove to the Lido for the first time and connected it with San Zaccaria. From 1890 the wooden bridges were replaced by stone bridges. 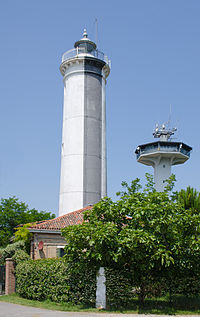 In 1882 there was a severe flood in Venice. The orphans were housed on the Lido. Barracks for the Carabinieri were built there in the same year . In 1883 the Lido was incorporated into Venice with the towns of Lido, Malamocco and Alberoni. The first school on the island was built in 1892, and in 1900 the water pipe from Venice to the Lido was extended, as was the power supply in 1905.

In 1906 the hoteliers merged to form Compagnia alberghi Lido , and in 1907 an electric beach tram was built . With the industrialization on the mainland, the previous passages from the Adriatic Sea into the lagoon became too narrow to allow tankers to pass. Therefore, the widening work began in 1925, as a result of which considerably larger amounts of salt water entered the lagoon at higher speeds. This led to ecological changes and the endangerment of the building fabric, about which there are disputes to this day. Construction work lasted until 1931, but has continued almost continuously since the 1970s. The very wide passage was also given an artificial island, from which 20 gates extend to Treporti as part of the Mo.SE flood protection project and 21 to Lido-San Nicolò. Each gate is 20 m wide, and the height varies greatly. At Lido-Treporti they are 18.5 m high, at Malamocco 29.6 m. Their thickness also varies between 3.6 m at Lido-Treporti and 5 m at Chioggia. The control center is being built in the arsenal .