The Council of ( Basel -) Ferrara - Florence is the 17th council of the Roman Catholic Church . It began in Basel in 1431 and ended in Rome in 1445. If the conference venues are narrowed down, namely between Ferrara-Florence and Rome, it met from April 9, 1438 to 1445, which means that it can be separated from the Council of Basel .

The Council of Ferrara-Florence is the last of a series of councils that tried to reunite the churches of the East and West, that is, to dissolve the Eastern schism .

The council was originally convened on July 23, 1431 by Pope Martin V in Basel, where it continued independently until 1449. When there were differences of opinion between Pope Eugene IV , the successor of Martin V, and the members of the Basel Council, Pope Eugene IV moved the council to Ferrara in 1438. When the plague broke out in Ferrara , the council moved on to Florence. The western church then continued the council until 1445 in Rome and decided to merge with some smaller eastern churches: the Armenian , the Maronite , the Nestorian and the Jacobite . The effort to reach an agreement with the entire Eastern Church and thus to end the schism, however, failed.

When Pope Eugene IV moved the council from Basel to Ferrara , the council split and the part that remained in Basel deposed Eugene as pope on November 5, 1439 and elected Amadeus VIII as the (counter) in a conclave that lasted only a few days . Pope . From 1439 to 1449 he was Felix V, the last antipope .

The council officially took place at the three locations. However, since the council in Basel was carried on independently, it has established itself in research to regard the council as two independent assemblies - one in Basel, one in Ferrara-Florence.

The Council of Constance passed the Decree Frequens on October 9, 1417 , according to which councils should meet “often” (the translation of the first word of the decree). In accordance with the decree, Pope Martin V called the first follow-up council five years later in 1423 in Pavia and the following council seven years later in 1430 in Basel (after that councils should meet every 10 years). The timely opening for the year 1430 was delayed. a. through the death of Martin V and the required election of Pope Eugene IV (1431–1447).

The Council Fathers gathered in Basel soon gave themselves their own statute and agenda, which outlined their idea of ​​the precedence of the Council over the Pope - this position is called conciliarism .

Pope Eugene IV opened the council on July 23, 1431, but did not care about it for the time being. The unworldly pope, in his false mistrust, finally declared the meeting in Basel on December 18, 1431 to be dissolved. But the council ignored the dissolution, supported by the German King Sigismund and the other secular powers. Protected by the German king, the council, based on the Decree Haec sancta synodus of Constance, declared the sovereignty of the councils over the pope as established. The council participants were supported by Nikolaus von Kues , an educated cleric of this era, in his work De Concordia Catholica , although he actually advocated a middle ground between extreme papalism and extreme conciliarism . But in the subsequent struggle between the Pope and his primacy and the democratic idea of ​​conciliarism, the Pope ultimately won.

King Sigismund led five crusades against the Hussites . In all of them the king was crushed by them. But then the Hussites split into radical Taborites and moderate Utraquists . The Utraquists reached a compromise with the council, which annoyed the Pope immensely. On May 31, 1433, this king crowned Sigismund in Rome as emperor. On November 30, 1433, the council proposed the so-called Basel compacts to the Utraquists - a modified form of the required Four Prague Articles of 1420. On December 15, 1433, at the urging of Emperor Sigismund, the Pope again recognized the Basel Council as legal. After the Utraquists had defeated the Taborites, opponents of this compromise, on May 30, 1434 in the Battle of Lipan , they recognized the compacts of the Council and Emperor Sigismund as King of Bohemia on July 5, 1436 in the Diet of Jihlava . This event is considered to be the actual hour of birth of the Hussite Church.

Three years after the escape of Eugene IV on May 29, 1434 after a revolution from Rome, there were new conflicts between the Pope and Rome. The reason was the Byzantine Emperor John VIII and his efforts for unity with Rome. He had the idea of ​​being able to save his empire, a territory enclosed by the advancing Ottomans and shrunk into a city-state. The council now wanted to outdo the Pope and began negotiations with John separate from the Pope. When the majority of the council planned to move the council to Avignon , which would have meant a renewed French papacy , the pope allied himself with the minority of the council, who would rather see an Italian city as the seat of the council. This minority left the Basel Council on March 7, 1437. Emperor Sigismund died on December 9, 1437 and the Habsburg Albrecht II was elected German king on March 18, 1438. With the death of Emperor Sigismund, who had always avoided a break between Pope and Council, the Council of Basel lost one of its most important pillars. In a flash, the Pope convened his own council in Ferrara on December 30th, which he disguised as a relocation of the Basel council.

Also in response to the refusal to move the Council to Avignon, France issued the Pragmatic Sanction of Bourges on July 7, 1438 , which supported the Council of Basel and conciliarism. With this convention, the foundation for the Gallican freedoms was laid in France .

The Basel Council responded to the summoning of the Council of Florence on June 25, 1439 with the removal of the Pope. On November 5, 1439, the Basel Council elevated Amadeus VIII , former Duke of Savoy , as Felix V to be the last antipope in history. On October 27, 1439 Albrecht II died unexpectedly. On February 2, 1440 was after his election Friedrich III. his successor. This forced the rump council to move to Lausanne , where the antipope Felix resigned on April 7, 1449. He was appointed Cardinal Bishop of Sabina by the Pope and died on January 7, 1451 in Geneva. On April 19, 1449, the Council of Basel also disbanded without singing. 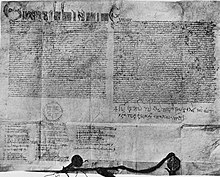 In contrast to most other councils, the occasion of the so-called Florentinum (after the main place of the council) was not the defense or definition of the doctrine of the faith or the tightening of church discipline, but it was planned as a union council. This council was also characterized by the rediscovery of the meaning of synodality, which councilism had exaggerated but which is an essential element of the church. The schism of the West has been promoting initiatives since the Council of Constance to reunite with the Eastern Church. Popes Martin V and Eugene IV are continuing these efforts in agreement with, but also in competition with, the Basel Council.

Even the Christian East , under the leadership of the Byzantine Emperor John VIII (1425–1448) and the Patriarch of Constantinople Joseph II, took a more open stance towards the Western Church , especially in view of the acute Turkish threat , among other things to more aid from the West against the Ottomans to get approved.

From the West one saw new perspectives for regaining the universality of the Church and promoted these “ecumenical” efforts. Due to the Turkish threat, the Union Council could not take place in the East as originally planned, but was convened by the Pope to Italy, i.e. initially to Ferrara , with the assurance of complete freedom for the Greeks .

Pope Eugene IV opened the council there in deliberate competition with Basel on January 8, 1438 by his legate Cardinal Nikolaus Albergati . De facto, however, the Council's activities only began with the arrival of the Pope himself, as well as the participants from the Eastern Church and the minority under Cardinal Giuliano Cesarini who had left Basel in March of that year.

When Pope Eugene met the Patriarch Joseph II in Ferrara, the last meeting of a Pope with an Ecumenical Patriarch up to the meeting of Pope Paul VI took place there. with Patriarch Athinagoras (1964).

After the council was relocated by mutual agreement on January 16, 1439 from Ferrara to the up-and-coming Florence for reasons of disease prevention and the papal financial shortage, the last church union with Byzantium came about there. An agreement was reached on the filioque , fourteen years before the fall of the Byzantine Empire. To this end, the primacy of the Roman Church and its head, the Pope, was again emphasized. The ambassadors of Emperor John VIII, who was hard pressed by the Ottoman Turks and hoped for Western military aid, agreed to far-reaching demands for the adoption of Western ideas.

On July 6, 1439, the Union was officially concluded with the signing of the Laetentur coeli decree in the main church in Florence . Like the church union of 1274 at the Second Council of Lyons and of 1369, this union did not last long either. It was still strictly rejected by the Byzantine clergy because of the atrocities for which the Western Crusade Church was responsible for the Fourth Crusade . Mark of Ephesus (also Eugenicus ), Archbishop of Ephesus , refused his signature in Florence and organized the church resistance against the union with the Latins. The hoped-for military aid did not materialize anyway. At a synod in Jerusalem, the oriental patriarchs voiced the anathema about the United Greeks, forcing the emperor John to return to Orthodoxy.

The renewal of the Union by Emperor Constantine XI. , Brother and 1448 successor of Emperor Johannes, remained meaningless because of the conquest of Constantinople by the Turks on May 29, 1453 , during which this last Byzantine emperor fell.

Many Greeks blamed God's wrath over the false union for the conquest. Therefore the Church Union of Florence was officially dissolved again.

On September 28, 1443, the Pope returned to Rome from Florence with the satisfaction of having reunited the Armenians (November 22, 1439) and the Jacobites (February 4, 1442) with the Catholic Church. He took his council with him.

In Rome, on September 30, 1444 and August 7, 1445, the union with the Nestorians (Chaldeans) and Maronites of Cyprus as well as with the Syrians was concluded.

In the spirit of conciliarism, the Council of Ferrara-Florence also failed, because although it passed some resolutions and was recognized by the Pope and the ambassadors from Byzantium , the resolutions were neither implemented in the Western nor the Eastern Churches and were therefore ultimately ineffective stayed. A few decades later, the reform work that was left behind became one of the initiators of the Reformation .