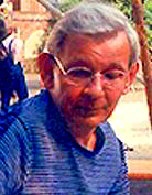 Felix Rexhausen, around 1984 in Hamburg

Felix Rexhausen grew up in Leipzig (until 1942) and Hamburg. In 1951 he graduated from high school in Hamburg. He then studied economics at the University of Cologne and graduated in 1956 with a degree in economics. Then he was assistant to Prof. Günter Schmölders . In 1959 he received his doctorate in economics and social sciences. Together with Carola Stern and Gerd Ruge , he founded the German section of Amnesty International in 1961 . From 1961 to 1964 he worked as a freelance editor at Westdeutscher Rundfunk in Cologne. In September 1963 he solved with the WDR glossary Mit Bayern Lebenthe “first major German satire scandal”. From 1964 to 1966 he was an editor at Kölner Stadtanzeiger , from 1966 to 1968 at Spiegel . He also wrote for the time . From 1968 he lived as a freelance journalist and writer in Hamburg. In 1978 he was a district writer for Harvestehude . In addition to his journalistic work, Rexhausen published novels, satires and poetry (some set to music by Wolfgang “Schobert” Schulz and made heard by Schobert and Black ). He is considered to be one of the first well-known German-speaking authors who openly dealt with the subject of homosexuality (not least based on his own experiences) as early as the 1960s: [...] "a young woman is breastfeeding her baby and calls the gay man a coward "[...].

Inauguration of Felix-Rexhausen-Platz on December 10, 2015

The Federation of Lesbian and Gay Journalists has been awarding the Felix Rexhausen Prize, named after Rexhausen, since 1998 .

On March 27, 2014, after a suggestion by the Association of Lesbian and Gay Journalists , the Cologne District Representation for the City Center decided to name a square at Cologne Central Station after Felix Rexhausen. The inauguration planned for May 2015 was suspended after the journalist and theologian David Berger had expressed the opinion in an online article that Rexhausen had made positive comments about pedophilia in the novel Touches from 1969 . The Association of Lesbian and Gay Journalists contradicted Berger's account. The Green politician Volker Beck called for an investigation into the allegations against Rexhausen, but without knowing the book. According to District Mayor Andreas Hupke , the allegations against Rexhausen were not confirmed, and the square was inaugurated on December 10, 2015.

The literary scholar Benedikt Wolf has compiled a comprehensive bibliography of Rexhausen's works. It contains 398 works by Felix Rexhausen and 63 sources with secondary literature.

For the double LP all year round! by Schobert and Black , he has written 14 song texts.