Gauernitz is a village in the municipality of Klipphausen in the district of Meißen in Saxony . The village has about 1200 inhabitants and extends over 8.43 km² of community area. The districts of Constappel , Hartha , Pinkowitz and Wildberg also belong to Gauernitz .

Gauernitz lies in the middle of the Elbe valley between Dresden and Meißen , a varied and natural landscape. The diverse flora in the area is one of the richest in species in Central Europe. Viticulture was once practiced on the slopes of the Elbe , today the area is characterized by orchards . Mixed forests criss- cross the strongly indented valleys on the left Elbe , such as the Saubachtal in Constappel, the Prinzbach and Regenbachtal and the Eichhörnchengrund . 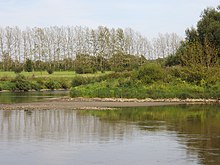 Lower, northwestern end of the Gauernitz Elbe Island , behind it the Kötitzer Ufer

The valleys to the left of the Elbe were already settled by Slavs in the 7th century . There was a small Slavic fishing village on the Elbe in today's Gauernitz (= maple village), which is still part of the place today. The strong influences of Slavic culture have remained visible to this day. Many of the large three and four-sided courtyards that originally emerged from a Slavic round building still exist today .

After the subjugation of the Daleminzier in 928/929, King Heinrich I built Meißen Castle at the easternmost point of the Gau. There is no evidence of any work by Heinrich I or Otto the Great in Gau Nisan . In the middle of the 11th century, three castle guards were built here to secure them . These are mentioned in a document in 1071. Another castle keeper center is believed to be on the 237 m high Gohlberg near Constappel.

In the 12th century, the development of the country began in the course of the highly medieval eastern settlement . Little by little the wooded slopes of the Elbe valleys were cleared and fell victim to agriculture. Thus, the land was transformed into the appearance today characterized by meadows and fields.

Silver ore was discovered around 1500 and mining and smelting began. Silver mining was then carried out in various places until the 17th century.

Thanks to the many streams in the valleys, watermills were also built, which today have lost their economic viability due to technical progress. In the Squirrel Ground you can see a working model on a scale of 1: 5. Of the 10 or so watermills in the area of ​​the left Elbe valleys , four are in the Gauernitz area.

High house of the castle

The knight's seat was first mentioned in 1393, it was owned by the von Ziegler family . In 1446 they temporarily ceded the estate to the von Schleinitz family . Balthasar Ziegler built today's castle, a tower-like two-storey house with a gable roof, using older components. The von Pflugk family acquired the manor in 1595 and sold it in 1648 to Heinrich Gerhardt von Miltitz , who in 1659 initiated the new construction or renovation of the castle. From 1707 the manor and castle were owned by the Counts of Zinzendorf and Pottendorf by inheritance . In the late 17th century, the Saxon General Feldzeugmeister Otto Christian Graf von Zinzendorf built the palace chapel south of the palace in Pottendorf . The devout founder of the Brethren in Herrnhut, Nikolaus Ludwig Graf von Zinzendorf , set up a prayer room in it. In 1717 there was a garden with over 260 different types of fruit. Around 1800, the Saxon war minister, Count Friedrich August von Zinzendorf, transformed the Elbe island into a romantic landscape park. From the center of the island, seven star-shaped avenues provided a clear view of the six castles and church towers in the area: Gauernitz Castle, Scharfenberg Castle , Brockwitz church tower, Weinböhla church tower , tower of the old Coswiger church and Wackerbarths Ruhe . In the center of the star was a stone column adorned with a snake and floral threads.

In 1804 the property came to Carl Sigismund von Hopffgarten , who sold the property to the princely von Schönburg-Waldenburg family in 1819 . This used the castle as a summer residence and had the manor rebuilt around 1850, with further modifications between 1862 and 1870. The extensive complex had a farmyard, a gardening center and a park with an island pond and extended to the banks of the Elbe. After the death of Prince Otto Victor in 1859, the property passed to his youngest son, Carl Ernst Prince von Schönburg-Waldenburg (1836–1915), who moved his residence entirely to Gauernitz. Carl Ernst had the palace rebuilt between 1862 and 1870 by the two architects Bernhard Schreiber and Ernst Giese in the German neo-renaissance style, including the older "high house". His grandson Karl Leopold (1902–1992) was expropriated in 1945. The name Gauernitz, previously Gävernitz or Jawirnitz, means Seebach.

After that, the castle was used as a municipal office, kindergarten and for residential purposes and was partly empty. The castle chapel fell victim to the demolition. Only sparse remains of the park have survived; the Elbe island is no longer accessible today. In 2003 the castle went into private ownership. The usage concept envisaged living space, commercial and public use. Since the contractual investment obligations were not met, the municipality reclaimed the castle in early 2008 by means of legal proceedings.

In 1923 Gauernitz was incorporated into Constappel, but just five years later the rural community that was created in this way was renamed after the larger district in Gauernitz. In 1937 Hartha and Pinkowitz were incorporated, and on July 1, 1950 by Wildberg. The previously independent municipality of Gauernitz was merged with Klipphausen and Scharfenberg on January 1, 1999 to form the municipality of Klipphausen.

Localities and districts of the municipality of Klipphausen