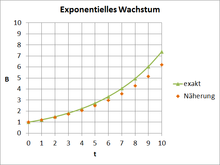 In the case of a growth function, the population size is dependent on time . She is of the form

Because is the initial stock at the time .

If , then , it is an exponential increase. The doubling time (also called double value time and generation time in biology ) is then .

With and therefore one speaks of an exponential decrease. The half-life is then .

Example 1: compound interest with an interest rate of 8% pa

This means the capital accumulated after years in €.

With an initial capital of € 100 . After 9 years the capital is due

with ( is the number of days)

After 27 days it's already

Infected. With unchecked growth and a limited population, an epidemic leads to logistic growth .

Cesium-137, a product of nuclear fission, has a half-life of 30 years. Its decay function is therefore

with ( is the number of years)

After 90 years there is because of

The picture on the right shows as an example that in the long term the existence (as well as the growth rate) of a positive exponential process is always greater than with linear , cubic growth or generally with all growth processes that can be described by completely rational functions .

With the exponential decrease , the x-axis forms the asymptote of the graph of the growth function. The stock size approaches zero but does not go away. In application cases such as B. in biology, the stock sizes are often whole numbers , so that very small values ​​ultimately have no meaning and the stock is practically extinct.

The DGL for the exponential process is:

This is a linear homogeneous differential equation with constant coefficients and can be solved, for example, using the " variable separation " method.

The growth rate can be derived from the DGL: .

To illustrate the discrete growth model in a recursive form derived from differences are consequences . The time difference in an equidistant sequence of times denotes for ; and means the corresponding stock sizes.

described. The growth factor is identical to that in the continuous-time case.

The stock size follows from the formulas for continuous growth with the substitutions , and to

Dissolution according to time

Example: For near one , approximately applies . A doubling ( ) therefore takes time .

Bacterial growth in E. coli . The generation time is around 20 minutes.

Population growth
The growth of microorganisms such as bacteria and viruses , cancer cells and also the world population can theoretically increase exponentially without limiting factors (e.g. competitors , (eating) enemies or pathogens, finite food sources). However, this is usually only a theoretical example. The growth z. B. of bacteria is normally described by a logistic function , which, however, is very similar to an exponential function at the beginning.

Radioactive decay
The number of nuclear decays in a quantity of radioactive material decreases almost exponentially over time (see also the law of decay ). In equally long time intervals, the same fraction of the amount still present at the beginning of the interval always decays.

Lambert-Beer law
If a monochromatic (single-colored) light beam with a certain incident intensity travels through an absorbing , homogeneous medium (e.g. dye) of a certain layer thickness, the intensity of the emerging beam can be represented by an exponential decay process. The intensity of the outgoing beam is proportional to the intensity of the incoming beam. This is closely related to the so-called absorption law for, for example, X-rays .

Exponential increase in amplitude after switching on an oscillator , until the limit sets in

Fanning an oscillator
The time-linear amplitude change when an oscillator starts to oscillate corresponds to a time-exponential increase in amplitude of a real oscillator with parameter resonance .

compound interest
The interest is added to a capital over a certain period of time and earns interest. This leads to an exponential growth in capital. The compound interest formula is , with the interest rate and the initial capital being (see also interest calculation , Josephspfennig - here a penny is invested in the year zero).

In the case of a savings book with 5% interest per year, the doubling time is included according to the rule of thumb above .

Pyramid scheme
These are business models in which the number of participants grows exponentially. Each employee has to recruit a certain number of additional employees, who in turn are supposed to recruit this number, and so on. Gift circles and chain letters work according to the same principle . 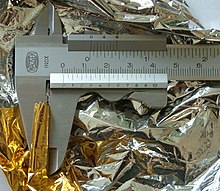 wrinkles
With each fold, the thickness of the paper or film doubles. In this way, thin foils can be measured with a simple caliper . The Mylar film in the picture consists of 2 5  = 32 layers of film after being folded 5 times , which together have a thickness of 480 µm. A film is therefore approx. 15 µm thick. After folding it 10 times, the layer would already be 15 mm thick, after another 10 folds it would be more than 15.7 m. Since the stacking surface exponentially reduced, can be paper in a commercially available paper size barely beat than seven times.

Chess board with a grain of wheat
The story , according to the intended Brahmin Sissa ibn Dahir , a game that now form the chess is known for the Indian rulers Shihram have invented to illustrate his tyrannical rule, which plunged the people into misery and distress, and to keep him . He was granted a free wish for this. Sissa wanted the following: On the first field of a chessboard he wanted a grain of wheat (depending on the literature also a grain of rice ), on the second field double, i.e. two grains, on the third again double the amount, i.e. four and so on. The king laughed and gave him a sack of grain. He then asked the ruler to have his mathematicians determine the exact amount, as one sack was not quite enough. The calculation showed: In the last (64th) field there would be 2 63 ≈ 9.22 · 10 18 grains, i.e. more than 9 trillion grains. More than any grain in the world. The increase in the number of grains can be understood as exponential growth using an exponential function of base 2.

Limits of the model

The model approach to exponential growth has its limits in reality - especially in the economic area.

“Exponential growth is not realistic” as a long-term trend , according to economist Norbert Reuter . He argues that the growth rates in more developed societies decline due to cyclical influences. The indicator for this is the gross domestic product (GDP). Looking at statistical data, it can be deduced that exponential economic growth is more typical of the early years of an industrial economy , but that at a certain level, when essential development processes have been completed, it changes into linear growth . If a further exponential growth is extrapolated , a discrepancy occurs between the growth expectation and the actual course. Among other things, this affects the national debt . The computationally incorrect expectation that national debt could be limited by economic growth, however, only lowers the threshold for new debt. If, however, the expected growth fails to materialize, a deficit arises that limits the future ability of a state to act. Because of the interest and compound interest, there is a risk that the national debt will grow exponentially.

Another aspect is that the demand does not increase immeasurably, but experiences a saturation effect, which cannot be compensated by appropriate economic policy . Considerations with regard to biological relationships, for example through competition for food or space, go in the same direction. In relation to the world population, this thematizes the debate about the ecological footprint - that is, about the carrying capacity of the earth with the relatively small consumption of regenerative resources in relation to the total consumption of resources . Here, the exponential growth model also neglects demographic developments such as the relationship between birth and death rates and the relationship between the female and male population.

Growth models that take into account the saturation effect are constrained growth and logistic growth , while the poisoned growth model also includes growth inhibiting factors in the process.