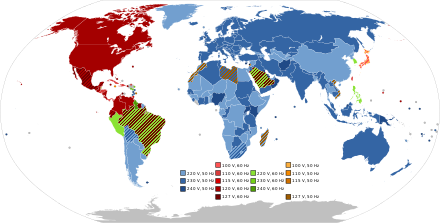 World map of grid voltages and grid frequencies (as of 2015)

The electrical voltage made available by the energy suppliers in the power grids , which is used to transmit electrical power, is referred to as mains voltage . In the narrower sense, mains voltage is often understood to mean the level of the alternating voltage in the low-voltage networks, in contrast to the voltages in the high-voltage network .

The network voltage provided by the energy supplier (in Germany: distribution network operator ) at the network connection point is characterized by its. IEC 60038 (in Germany: DIN EN 60038 VDE 0175-1)

In Europe, further characteristics of the voltage (frequency, height, curve shape and symmetry of the external conductor voltages) are specified in EN 50160 .

Structure of the low-voltage network

The mains voltage is usually distributed to the consumers in the low- voltage network with the following configurations in TN systems :

In three-phase systems , the effective value of the sinusoidal AC mains voltage between an outer conductor and the neutral conductor is 230  V , and between two outer conductors approx. 400 volts.

In Canada, the USA, Mexico and some northern states in South America, the nominal value of the mains AC voltage is 120 V (previously 110 V). For larger consumers such as air conditioning systems, double the mains voltage of 240 V (previously 220 V) is also common. The mains frequency is 60 Hz. The low-voltage networks in these countries are implemented as a single-phase three-wire network; three-phase alternating current is often not available for smaller consumers; if it exists, the voltage is 208 or 415 V.

Until 1987 the mains voltage was in much of Europe, including Germany, Austria and Switzerland , while it was in the United Kingdom . The voltage of , which has been valid in Europe since then , was specified as the standard voltage in the international standard IEC 60038 : 1983.

From 1987 onwards there was a changeover in several stages . Since 2009 the line voltage has been allowed to be between 207 and 253 volts.

With the minimum voltage, the tolerance band was not and is not violated: While 198 volts were permitted earlier, it is now at least 207 volts.

Increasing the voltage by around 5% leads to an increase in performance in many devices. For devices whose function is based on the ohmic resistance , e.g. B. fan heater or kettle , the consumption increases quadratically in relation to the voltage increase, i.e. by about 10% of the power. In many cases, the amount of energy to be paid for remains roughly the same, since a kettle, for example, heats up the given amount of water faster and switches off earlier due to its higher performance.

On January 1, 2001, an EMC standard came into force that stipulates regulations on the permissible low-frequency interference spectrum (harmonics) for electronic consumers from 75 watts.

Also asynchronous motors cause net impurities, called Nutenpfeifen. It is created by the subdivision of the squirrel cage and the resulting AC voltage fed back into the network with a higher, speed-dependent frequency.

The grid frequency is the requirements of today according to European interconnected system very strictly adhered to so that they can be used as a reference value, for. B. to control electrical clocks or for voltage-controlled inverters for feeding in solar power.

This includes protective insulation , protective grounding and protective separation , which prevent accessible conductive parts (e.g. housing) from assuming dangerous voltages in the event of a defect.

Sockets must be secured against touching the live parts. To protect children, there are also child safety devices that are intended to prevent objects from being inserted into the openings of sockets .

Larger consumers such as industrial companies or hospitals are usually connected directly to the medium-voltage network with voltages of 10 kV ( kilovolt ) or 20 kV via one or more in-house transformer stations .

In the medium-voltage network, in addition to 20 kV, especially in urban areas, because of the older cable systems there, 10 kV are also common. In the high-voltage direct current , there is no standardized voltages.

In traction current supply networks, the standard voltage in Germany and Austria is 110 kV, in Switzerland 66 kV and 132 kV.

The voltage is not standardized on trams and underground trains. In Germany, Austria and Switzerland, DC voltages of 500 V to 750 V are mostly used here.