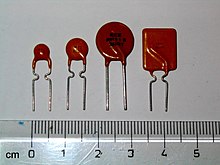 Types and areas of application

Circuit symbol of a PTC thermistor

As electronic components, PTC thermistors are usually made of semiconducting , polycrystalline ceramics (for example BaTiO 3 ), which build up a barrier layer at the grain boundaries in a certain temperature range . More recent developments have led to components with a very steep increase in resistance from a characteristic temperature (approx. 80 ... 130 ° C). Furthermore, the materials were improved so that self-resetting fuses could also be created for mains voltage applications.

PTC thermistors based on doped silicon are used in the temperature range from −50 ° C to +150 ° C and are characterized by their small size, response time, tight tolerances and good long-term stability. For the KTY11-6 there is a parabolic relationship between resistance and the Celsius temperature :

In applications, measurements are normally taken and the temperature sought. The resolution ("inversion") of these formulas along with the associated linearization is described in Wikibooks.

Characteristic curve of a PTC

During production, mixtures of barium carbonate and titanium (IV) oxide are ground, mixed and then, depending on the intended use, pressed into disc, rod or tube form together with other materials that produce the desired electrical and thermal properties. The bodies are then sintered at high temperatures (between 1000 ° C and 1400 ° C) .

Due to the grain boundaries located acceptors are electrons bound from the grains. This leads to the development of depletion marginal layers on the grain surfaces, which cause potential barriers . Below the Curie temperature , these potential barriers are largely compensated for by the spontaneous polarization . The conduction mechanism is therefore essentially based on the charge carrier density , which increases with increasing temperature. This is initially a typical thermistor behavior . The polarization decreases with increasing temperature until it finally disappears completely above the Curie temperature. It is true that the charge carrier density continues to increase with increasing temperature, but due to the lack of polarization, the insulating effect of the depletion outer layers comes into its own, so that the resistance increases strongly exponentially.

If the PTC thermistor is heated even further, the increase in charge carrier density now again counteracts the insulation through the depletion edge layers, so that there is a slight decrease in resistance. This behavior is similar to that of an NTC thermistor. 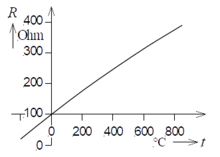 Characteristic curve of the Pt100

Resistance curve of an incandescent lamp at different operating voltages; the cold resistance is only about 7% of the resistance at nominal voltage.

Pure metals have an electrical resistance that increases linearly with temperature. The platinum resistor Pt100 (wire or layer) is common for temperature measurement and is standardized .

Incandescent lamps are also suitable as overload protection; When cold, they have a cold resistance of only a few percent of the resistance when operated at nominal voltage.

In the past, iron-hydrogen resistors were used to stabilize the current in the heating circuit of tube devices. They had an almost constant power consumption over an operating voltage range of around 1: 3.

Alloys have a much smaller temperature coefficient, which can even be zero in certain temperature intervals (see constantan ).

For temperature measurement in connection with microcontrollers , the PTC thermistor is often connected to the constant operating voltage via a series resistor, whereby the relationship between temperature and voltage is S-shaped and there is the possibility of linearization around the turning point. The prerequisite is that the temperature to be measured must be near the turning point of the curve. The series resistor must limit the current to such an extent that no relevant self-heating of the sensor occurs.