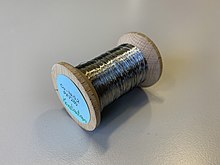 Konstantan is a brand name of VDM Metals (formerly ThyssenKrupp VDM GmbH ) for an alloy that generally consists of 55% copper , 44% nickel and 1% manganese . It is characterized by an approximately constant specific electrical resistance over a wide temperature range . Other alloys are known with a similarly low (e.g. Manganin, CuMn12Ni ) or even lower temperature coefficient such as Isaohm .

The brand name was registered with the German Patent and Trademark Office on December 14, 1952 and has since become common language as the name for this copper-nickel alloy. In the English- speaking world, the name is protected in the spelling Constantan . Another brand name for a very similar alloy is Isotan from Isabellenhütte Heusler .

The rather low temperature dependence of the specific electrical resistance of constantan is almost exclusively due to the fact that this alloy has a high density of impurities within its crystal structure over a wide temperature range. This means that the density of the imperfections in this material also depends on the temperature and increases slowly with increasing temperature, but because of the large number of imperfections in the crystal structure, these mainly influence the electron scattering on them and not that also on the temperature dependent electron- electron or electron- phonon scattering. The Kanthal alloy has similar properties .

Because of the small temperature coefficient of the specific resistance, constantan is used for precision and measuring resistors. Also sliding and heating resistors are made of constantan.

Constantan with 60% copper and 40% nickel has for another source over the temperature range -161 ° C to +16 ° C a linear coefficient of expansion .

Constantan has an inconspicuous coefficient of expansion, similar to that of some other metals such as nickel, iron and steel. There are pure metals with only about half (e.g. tantalum ) and special alloys with only less than a twentieth of the thermal expansion of constantan, such as Invar .