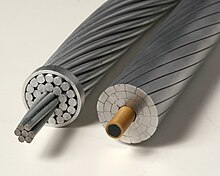 Aluminum conductors; On the left with a central steel cable, on the right with a fiber-plastic composite 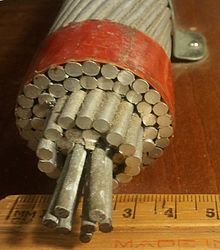 Close-up of a conductor of a high-voltage overhead line; centrically the steel core, outside the aluminum cores

A conductor cable is a cable used to transport electricity on an overhead line as part of an electrical line .

Conductor ropes do not have an insulating sheath, they are "bare" so that short circuits and unwanted current paths can only be prevented by safety clearances . The conductors are therefore hung high enough above the ground in an obstacle-free route and attached to the overhead line masts with long insulators . Bare ropes also have the advantage that they can give off their heat unhindered to the surrounding air.

The most economical compromise between material costs, weight and electrical conductivity is offered by aluminum , which does not conduct quite as well as copper , but is much cheaper and, above all, lighter. Pure aluminum ropes, on the other hand, require relatively short spans in order to reliably carry their own weight and also wind or ice loads . Steel ropes offer higher tensile strength , but the electrical conductivity of steel is significantly lower than that of aluminum. That is why - especially for large spans - combined aluminum-steel ropes are used, which have a steel core on the inside that provides mechanical (tensile) strength, and aluminum cores on the outside to ensure good electrical conductivity. Ropes made from Aldrey , an aluminum alloy, also offer high tensile strength even without a steel core.

Since ordinary aluminum components soften at higher temperatures, the operating temperature of such conductor cables must not exceed values ​​of 80 ° C. High-temperature conductors made of special aluminum alloys can be loaded up to 310 ° C, but the undesired transmission losses of the line also increase accordingly.