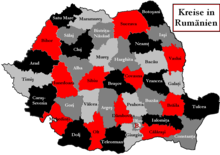 Administrative division of Romania into districts

The Romanian political system is a representative parliamentary democracy . The head of state is the president, the head of government the prime minister. The legislative power rests with the two houses of parliament. The judiciary consists of a constitutional court and a system of judicial bodies headed by the Supreme Court. The government under Viorica Dancila (as of the end of 2018) is accused of being primarily occupied with bringing the independent judiciary under its control. Prosecutor General Augustin Lazăr, who is considered to be of integrity, is under impeachment proceedings; the anti-corruption authority DNA (Direcția Națională Anticorupție) is considered weakened after the dismissal of its head Laura Kövesi.

In the 2019 Democracy Index, Romania ranks 63rd out of 167 countries, making the country an “incomplete democracy”.

The first post-socialist constitution in Romania was adopted in 1991. In 2003, during the reign of the PSD, a reformed constitution came into force; it was confirmed by a majority of citizens in a referendum. Most of the constitutional amendments were requested by the European Union (EU) to allow Romania to join the EU . According to Article 1 of the Constitution, Romania is a democratic constitutional state in which human dignity , the rights and freedoms of citizens, justice , the free development of the human personality and political pluralism represent and guarantee the highest values.
The Romanian economy is a market economy . The state must u. a. Ensure free trade and the protection of fair competition and create a favorable framework for production.

The national legislation is incumbent on a bicameral parliament , which consists of the Chamber of Deputies ( Camera Deputaților ) and the Senate ( Senatul ). The members are elected for a period of 4 years by means of mixed voting and proportional representation. The last election took place on December 11, 2016 . On December 21, 2016, Liviu Dragnea ( PSD ) became President of the Chamber of Deputies.

The President of Romania (Rum. Președinte) is directly elected by the people for a period of five years (up to 2004 for four years). He is responsible for monitoring compliance with the constitution and the functioning of public authorities, and he represents the state. He acts as a mediator between the powers of the state, the state and society. He nominates the prime minister , who in turn appoints a cabinet, which has to be confirmed by a vote of confidence in parliament. The President is also the Supreme Commander of the Army and Chairman of the Supreme Council for National Defense (Art. 91 (1)). A maximum of two terms of office are possible. Klaus Johannis has been state president since December 2014.

The Romanian legal system is based on the pénal code . The judiciary is independent and judges appointed by the president are non-removable. The President and the other justices of the Supreme Court are appointed for a term of six years and may be reappointed. Court hearings are public, except in special cases regulated by law.

The public prosecutor's office represents the general interests of society and defends the legal system and civil rights and freedoms. Prosecutors operate in accordance with the principles of legality and impartiality.

The central government appoints a prefect for each county and for the Bucharest municipality. The prefect represents the government at the local level and directs the public services of the ministries and other central bodies at the county level. A prefect can block an act by a local authority if he finds it unlawful. The matter is then decided by an administrative court. Since January 1, 2006 they are no longer allowed to be members of a party. This urgent law was accepted by the government on December 14, 2005 without debate in parliament by the Minister for Administration and Internal Affairs, Vasile Blaga . This law aims to ensure that future prefects are professional administrators.

Under the new legislation, which has been in force since January 1999, local councils have control over the use of the budget made available to them by central government and have the power to raise additional income at the local level. The government-appointed prefects, who previously had significant powers over the budget, are now limited to reviewing expenditures for constitutional compliance.

In the Chamber of Deputies

The following parties are represented in the Chamber of Deputies:

Political systems of the states of Europe