Official seat of the Prime Minister and the Council of Ministers

The government of the Republic of Albania ( Albanian  Qeveria e Republikës së Shqipërisë ), officially the Council of Ministers (alb. Këshilli i Ministrave ), consists of the Prime Minister , his deputy and the ministers . It exercises any state function that is not assigned to other state or local government organs.

The President of the Republic appoints the Prime Minister either at the beginning of the legislative period or, if this office becomes vacant, on the proposal of the party or coalition with a majority of seats in the Kuvendi i Shqipërisë (Albanian Parliament). This candidate then has to be approved by a majority of Parliament. If this does not happen three times in a row, the President dissolves Parliament and new elections take place. 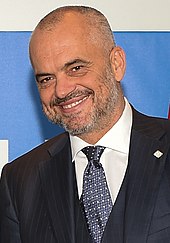 Edi Rama ( PS ) is Prime Minister of the Republic of Albania during the 2017–2021 legislative period .

1Even before the first democratic elections in March 1991, Nano had headed a transitional government (Nano I cabinet) .