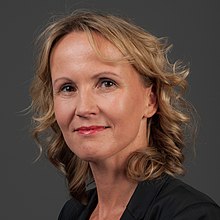 After attending a polytechnic high school in Dessau, Steffi Lemke trained as a zoo technician from 1984 to 1986 . She then worked as a mail carrier from 1986 to 1988 . She attended a secondary school graduation course at the Philanthropinum Dessau . After graduating from high school in 1988, she completed a degree in agricultural science at the Humboldt University in Berlin , which she graduated in 1993 as a certified agricultural engineer (specializing in animal production).

In 1989, Steffi Lemke was one of the founders of the Green Party in the GDR . From 1993 to 1994 she was a member of the Green State Executive in Saxony-Anhalt .

From 2002 to 2013, Steffi Lemke was the Federal Political Director of Bündnis 90 / Die Grünen. This made her the longest-serving Secretary General and Political Director of the parties represented in the German Bundestag. She was re-elected in 2004 with no opposition, in 2006 against the candidacy of Kirsten Böttner with over 2/3 of the votes, and in 2008 with just under 84%; In 2010 she received 82% of the vote, in 2012 83%. After the federal election in 2013 , in which Lemke was re-elected to the Bundestag, the entire federal executive of the Greens resigned. According to the party statutes, only two members of the federal executive board may sit in parliaments (statutes of the federal association, § 15, paragraph 4). With Cem Özdemir , Claudia Roth and Astrid Rothe-Beinlich , this applied to four members of the federal executive committee after the federal election. Lemke initially left it open whether she would run for chairmanship, but then decided against it.

From 1994 to 2002 Steffi Lemke was already a member of the German Bundestag . She was always drawn into the Bundestag via the Saxony-Anhalt state list. from 1998 to 2002 she was Parliamentary Managing Director of the Bundestag faction Bündnis 90 / Die Grünen.

In 2001, Steffi Lemke was one of the eight members of her parliamentary group who spoke out against the use of German troops in Afghanistan . In the vote in the Bundestag on November 16, 2001, however, she voted for the Bundeswehr to participate in Operation Enduring Freedom . Federal Chancellor Gerhard Schröder had combined approval of the Bundeswehr mission with a vote of confidence . The eight MPs therefore agreed among themselves to coordinate voting behavior, with four MPs voting in favor of the Federal Government's proposal and four against. In doing so, they made it possible for the Bundeswehr to be deployed in Afghanistan, secured their mandate and prevented the government from losing the vote and a possible break-up of the red-green coalition.

The party convention of Bündnis 90 / Die Grünen in Saxony-Anhalt elected Lemke on October 13, 2012 with 63 out of 73 votes (86.3%) as the top candidate in the state list for the 2013 federal election. She moved again after three electoral terms due to the election results in the Bundestag. Steffi Lemke is a full member of the Committee for the Environment, Nature Conservation, Building and Nuclear Safety . She is an alternate member of the Food and Agriculture Committee .

Since 2013, Steffi Lemke has been one of four parliamentary directors in the Bundestag faction of Bündnis 90 / Die Grünen.

Wikinews: Steffi Lemke  - in the news