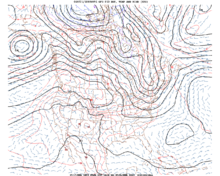 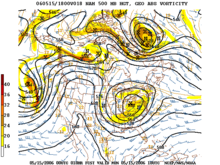 Numerical weather forecasts (Engl. Numerical weather predictions , NWPs) are computer-based weather forecasts . From the state of the atmosphere at a given initial point in time, numerical solution of the relevant equations (in the dry adiabatic case: Navier-Stokes equations , thermal equation of state of ideal gases , first law of thermodynamics , continuity equation , in the wet diabatic case further continuity equations and radiation transfer equations ) becomes the state to later times calculated. These calculations sometimes cover a forecast period of more than 14 days and are the basis of all current weather forecasts. In operational operation, they are mostly processed using statistical methods (see Model Output Statistics ).

In such a numerical prediction model, the computation area is discretized with grid cells and / or by a spectral representation , so that the relevant physical quantities, such as temperature , air pressure , density , wind direction and wind speed, can be represented in three-dimensional space and as functions of time . The physical relationships that describe the state of the atmosphere and its changes are modeled as a system of partial differential equations . This dynamic system is approximately solved with numerical methods , which are implemented as computer programs. Because of the great effort, supercomputers are usually used for this . Basically, a distinction is made between global models (today approx. 10 - 50 km mesh size), the calculation area of ​​which covers the entire globe, and local or section models (also LAM for limited area model ). The latter are usually calculated with a higher resolution (today approx. 1 - 15 km mesh size) only in a limited area. In order to then meaningfully determine the values ​​at the edge of the model area during the forecast calculation, usually interpolated results of a global model or large-area detail model are used (so-called “nesting”).

Relevant processes that are smaller than the model mesh size and are not taken into account in the above-mentioned system of equations must be parameterized. The parameterizations describe the effect of these processes on the computational variables on the model grid under simplified assumptions and are an integral part of the model code. Typical parameterizations are: cloud microphysics (formation and change of cloud and precipitation particles), radiation, turbulence, soil model, schemes for shallow and deep convection.

In addition, the definition of the initial state of the model atmosphere is important for the success of the model prediction. A weighted combination of measured values ​​and older model predictions is interpolated onto the model grid (so-called data assimilation ) using different mathematical methods ( variational method such as 3D-Var , 4D-Var , optimal interpolation , nudging , Kalman filter ). Measured parameters of the remote sensing devices (radar, lidar, satellites) have to be transformed into model variables and vice versa. Conventional measurements of temperature, humidity, pressure etc. from weather stations, weather balloons, airplanes, ships and buoys only need to be interpolated in terms of space and time. Furthermore, incorrect measurements must be sorted out and systematic measurement errors ( bias ) corrected.

The possibility of a numerical weather forecast was first demanded in 1904 by Vilhelm Bjerknes in a lecture without being able to show a concrete way. Lewis Fry Richardson calculated a weather forecast for the first time during World War I, and while the result was grotesquely incorrect, after the invention of the computer it was possible to build on his preparatory work. John von Neumann then proposed in 1946 that the computer should be used for this purpose. In March 1950, the mainframe computer ENIAC calculated a weather forecast from actual weather data for the first time. Due to the increasing computer resources and new knowledge in the field of meteorology and numerics, the resolution and quality of the model predictions has been improved ever since. More and more weather services, also in developing and emerging countries, operate their own numerical forecasts or at least use numerical products.

The weather forecasts calculated by the models are often imprecise for predicting the weather “on site” due to the limited model resolution, the uncertainty in the initial conditions and the non-linear developments in the atmosphere (“ chaos ”). The calculated values ​​are therefore usually checked for plausibility by meteorologists , compared with empirical values and transformed into forecast texts and weather warnings.

Model Output Statistics (MOS) is an approach to automated small-scale weather forecasting. Here, the data supplied by the models are set in relation to statistical series of measured values ​​in order to be able to provide the most accurate forecast possible “on site”. The systematic error of the model is removed using the statistics of past times (model and station values). In contrast to this, with Direct Model Output (DMO) the data supplied are only interpolated for the desired locations.

Due to the chaotic nature of the weather, in many cases a slight change in the initial data, particularly in the case of medium and long-term forecasts, can lead to a complete change in the forecast ( butterfly effect ). Therefore, in addition to the so-called main run, in which the computers are fed with the actually measured values, further runs are carried out in which slightly changed data and a somewhat coarser resolution of the model grid points are used. This is how the forecast uncertainty should be estimated. The results of these runs are compared in ensembles . If the results for a period are similar to the forecast, this is an indication that the forecast for this period is relatively certain. While in some cases the general weather situation can be forecast quite well over 10 days, there are other cases in which a satisfactory forecast is hardly possible after just a few days. The initial disturbances for the individual ensemble members are generated by means of random (stochastic) disturbance, disturbance of the assimilated observations to take account of measurement errors (ensemble data assimilation), disturbance in the direction of greatest sensitivity to disturbance by means of so-called singular vectors or rescaling of the divergence of previous predictions ( breeding ). More recently, the uncertainty in the parameterizations during the model integration due to the disruption of the calculated quantities contained therein has also been taken into account (stochastic model physics and multiphysics). Global ensemble models are created, for example, at EZMWW , UK-Metoffice , NCEP in the USA and Canada, and by Météo-France. Ensembles with high-resolution detail models such as the COSMO-DE-EPS of the German Weather Service have only been in use for a few years and are still the subject of intensive research.

There are a variety of models of different weather services . These use different numerical methods, grids and parameterizations and can therefore differ considerably in their prediction. The models are usually recalculated at least once a day and start on the main synoptic dates 0, 6, 12, and 6 p.m. UTC .

One of the best-known models is the global model GFS ( Global Forecast System , formerly AVN ) from the US American NOAA . It calculates forecasts four times a day. The GFS data are freely available and are therefore particularly used by small weather services. GFS is divided into three sub-models, the most detailed of which provides a forecast for all three hours of the next 3.5 days and has a grid resolution of around 40 km. The long-term partial model extends up to 16 days into the future, but only forecasts the weather for every twelve hours and has a lower resolution.

Other well-known global models are:

In principle, climate models have the same structure as weather forecast models (discretization on a grid or in the spectral space , numerical solution of the same physical equations, parameterizations). There are also global and section models. However, the prediction objectives (mean state of the atmosphere over the seasons up to millennia (climate) versus the most exact state of the atmosphere in the next hours or days (weather)) are different, which leads to slight deviations in the conception. In the weather forecast, the knowledge of the initial state (initial value problem) by means of data assimilation plays an important role. The details of an individual weather situation, on the other hand, disappear due to the time averaging in climate models. These, on the other hand, require as precise a knowledge as possible and future projection of the changes in the external forcing ( boundary value problem ) such as fluctuations in solar radiation , the sea temperature (therefore frequent coupling with an ocean model ) or the atmospheric composition (aerosols, greenhouse gas emissions from natural and artificial sources) and the nature of the soil (Change in vegetation through agriculture with effects on radiation and the water cycle) etc. The ensemble technique is also popular in climate modeling , with a focus here on estimating the uncertainty of the named external drives (scenarios) caused by the (unknown) future human behavior (land use, emissions) can be influenced. In addition, the implementation of the physical conservation laws in the model (conservation of mass, conservation of energy) is of greater importance due to the long calculation times. If the approximate solution of the equations through the discretization leads, for example, to a minimal systematic change in the atmospheric mass, this is often hardly relevant on a scale of a few hours (weather model), whereas the effect can add up dramatically over centuries (climate model). The long computing times also often require compromises in the resolution of the climate models (coarser mesh size), which in turn can lead to differences in the processes to be parameterized. However, some numerical models - e.g. B. ICON , COSMO and ALADIN - can be used for both weather forecast and climate calculations.