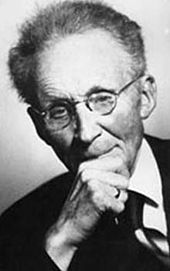 Vilhelm Friman Koren Bjerknes (born March 14, 1862 in Kristiania in Norway ; † April 9, 1951 in Oslo ) was a Norwegian physicist and meteorologist who made a name for himself in the field of weather forecasting .

First, he supported his father Carl Anton Bjerknes in his mathematical research. In 1890 he became Heinrich Hertz's assistant in his research work on electromagnetic resonance , which was fundamental for later radio technology. 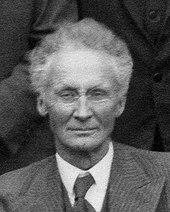 Vilhelm Bjerknes
in London in 1934

In 1895 Bjerknes became a professor of applied mechanics and mathematical physics at Stockholm University . In 1907 he moved to the University of Kristiania and in 1912 accepted a call to the University of Leipzig , where he became head of the Geophysical Institute. The focus of his research here was the elaboration of the synoptic representation of atmospheric conditions. When the conditions for research in Leipzig deteriorated drastically as a result of the First World War , Bjerknes returned to Norway in 1917 and founded the Geophysical Institute in Bergen . Here, aided by the dense meteorological observation network on the Norwegian coast, the discovery of discontinuity lines on the weather maps took place, which led to the polar front theory of the Bergen School he founded . Bjerknes, who wanted to give the dynamic processes in the atmosphere an exact mathematical-physical basis, laid the foundations for today's numerical weather forecast.

Bjerknes published a number of textbooks. From 1926 until he left in 1932 he worked at the University of Oslo .

His son and colleague in Bergen was the meteorologist Jacob Bjerknes .

A crater on the moon and one on Mars are named after him, as well as the berk , an outdated unit of measurement of geopotential .