from Wikipedia, the free encyclopedia
Cyclogenesis in the model of the Bergen School

A disturbance causes a wave to form along the front. First precipitation falls (green areas).

Since the cold front moves faster than the warm front, both unite in an occlusion . 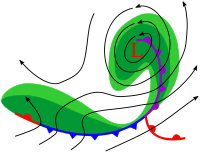 The occlusion enlarges and cuts off the low pressure area from the influx of warm, moist air masses from the south. It will then gradually dissolve.

The research group around the Norwegian theoretical physicist and meteorologist Vilhelm Bjerknes , which made significant contributions to synoptic meteorology from 1917 onwards, is known as the Bergen School of Meteorology ( Norwegian Bergensskulen i meteorologi ) . It is named after the Norwegian city of Bergen , where Bjerknes' group at the Geophysical Institute did research.

The Bergen School described the polar front for the first time and developed scientific methods for weather forecasting based on it , which from the 1930s onwards became established in the United States and the rest of Europe.

With the development of the electric telegraph from the middle of the 19th century, with which weather observations could be communicated quickly and over great distances, synoptic meteorology established itself as a discipline that could make weather forecasts with the help of weather maps . The analysis of the weather maps was based less on physical principles than on different practical rules and the experience of the meteorologist. While Vilhelm Bjerknes laid the foundation for an “exact physics of the atmosphere” with his primitive equations in 1904, the numerical solution of these equations was not yet possible at the beginning of the 20th century. At the same time, the need for improved practical forecasting increased with the advent of aviation and, ultimately, the First World War .

In order to counter the grain shortage in Norway from autumn 1917, Bjerknes received a grant of 100,000 crowns from Prime Minister Gunnar Knudsen to expand the existing weather service to Vestland and to improve the weather forecasts that are important for agriculture. There, with the help of the local population, he established what was previously the densest network of weather observers in the world. From the data obtained in this way, Jacob Bjerknes formulated the “Norwegian model” for the structure of extra-tropical cyclones in 1918, i. H. dynamic low pressure areas in the middle latitudes . This was in the years of Tor Bergeron around the occlusion and Halvor Solberg supplemented by a classification of the stages in the life cycle of a low pressure system.

The Bergen School quickly integrated their new model into the daily routine of weather forecasting for Norway. At the same time Bjerknes and his colleagues contributed to the high popularity of their model with publications in high-ranking journals such as Monthly Weather Review , the Meteorological Journal and Nature, as well as through lectures in several countries. However, some weather services have been reluctant to adopt the new methods. The British Met Office did not draw fronts on their daily weather maps until 1933, and the US Weather Bureau only from 1936 .

Representative of the Bergen School