Use of language in the GDR

Under language in the GDR linguistic expressions are summarized in the lexis and stylistics only or especially in the Democratic German Republic were in use. This summary includes terms used in everyday language as well as expressions defined by the state or used in the media that were customary until 1990 and have survived in individual cases to this day.

The term typical of the GDR

A lexeme or syntagma can be typical of the GDR in various ways.

Terms that were only used in the GDR area

Lexemes in this group were only used in their form and meaning in the GDR. This group includes words such as broiler , combine , plastic , brigade , tractor driver , whereby a delimitation from the “western term” is intended. Some words such as Brigade were used in the rest of the German-speaking area, but with a completely different meaning or in the special vocabulary.

Lexical units typical of the GDR

In the GDR words were often only becomes typical from the German-speaking world by being linked to new forms and new meaning given such as people and bookstore to popular bookstore , youth and life to youth life , or hero and work to Hero of Labor . The new forms were often translations from Russian . Examples are stennaja gaseta translated to wall newspaper or dom kultury translated to house of culture (later developed to culture house ). A well-known example of the adoption from Russian was also the mass political work , which was set instead of the political mass work , since in Russian word compositions are more likely to be formed by adjectival additions.

These collocations were often created for the GDR as typical catchwords and terms through the peculiar combination of verbs with prepositions and nouns . One example is the well-known verb delegieren, which was formed in the GDR-typical form with a preposition and noun zu delegieren to university studies .

In the GDR there were also words and idioms that were replaced by new forms in the Federal Republic due to the linguistic development there. These traditional lexemes used in the GDR included addressing them by letter as worth : Dear colleague , dear gentleman , dear citizen (today generally perceived as derogatory and has disappeared from general use) or dulli files (superseded by the term folder ). In addition, older forms of expression, such as sideboard , and words that related to the GDR reality, such as plan , but also originated from earlier times, lasted considerably longer .

On the other hand, vocabulary typical of the GDR has also become common use, such as Ampelmännchen , also as an umbrella term for its numerous modifications.

Temporal, spatial and situational differences, in which sense the terms were used, are also possible.

German and Polish schoolgirls at work in a tree nursery 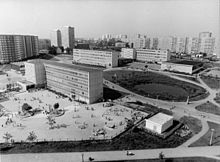 New building area in Berlin-Marzahn in 1987 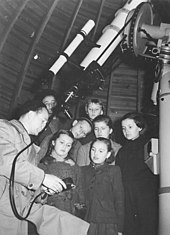 Arrival of a special train from Bad Schmiedeberg with musicians and fanfare trains for the III. Children's and Youth Spartakiad 1970

A wall with Sprelacart cladding in a Russian sleeping car

Slogans for the Second Party Conference of the SED in 1952

Slogans for May Day and other demonstrations were given. For this purpose, official lists were published in the newspaper, from which slogans for banners carried along could be chosen. Slogans continued to be used, for example, at party conferences, in programs to meet the planned goals, on buildings via wall newspapers.

Examples of slogans and key words:

Sometimes such slogans were also used ironically, for example the quote From our companies there is much more to be gained from Walter Ulbricht, who meant increasing labor productivity. Colloquially, however, it meant the theft of material and tools in the factories by workers and employees who, due to the poor supply situation, exchanged, sold or used the stolen things themselves.

In the turning point in 1989 but invented demonstrators themselves very apt, sometimes ironic and sarcastic slogans. Slogans such as “We are the people!” And “No violence” accompanied the peaceful revolution. Other slogans were, for example, “Stasi in production!” (What was meant was that they should work) and “We are one people!” (After “We are the people!” At the end of 1989 / beginning of 1990).

Locations were occasionally given official additions to their names

or were renamed, mostly politically motivated:

Used by western media as alleged GDR idiomatisms, but never spoken well or completely unknown in the GDR: