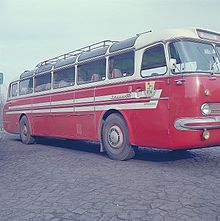 Ikarus 55 with front and rear doors and roof rack

The Ikarus 55 was developed from the Ikarus 66 bus with a self-supporting body, which was presented in 1952, as a touring or intercity bus with comfortable equipment for the time. The drive unit was a water-cooled six-cylinder swirl chamber - Diesel engine type D 614 of the Hungarian producer Csepel with a displacement of 8275 cc, together with a manually synchronized part to be shifted five-speed gearbox is used. The engine delivered an output of 107 kW (145 hp). It was arranged upright in the rear and drove the gearbox via a single-disc dry clutch and then the rear axle of the vehicle by means of an external planetary gearbox . With this drive unit, the bus reached a top speed of 78 to 98 km / h, depending on the gear ratio.

Leaf-sprung rigid axles with telescopic shock absorbers were used on the chassis . With an empty weight of 9.5 t, the permissible total weight was 14.9 t. The pneumatic brake acted on all wheels and was supplemented by a mechanical parking brake .

Depending on the design, the passenger compartment offered space for 32 to 44 seats. The two hand-operated passenger doors opened outwards like the driver's door. The rear door was arranged either in front of or behind the rear axle, the front door in the front overhang. The bus had a two-part panoramic windshield and mostly roof edge glazing and / or a roof rack. The position lights were arranged in small fins on the roof of the vehicle. The engine compartment was located behind the passenger compartment, separated from the passenger compartment by a wall with a window, and was accessible through two large folding doors in the rear that opened wide on both sides. Overall, the result was an appearance that corresponded to the ideas of aerodynamics at the time , which was emphasized by stylistic elements of the vehicle design of the 1950s - panorama windows and fins. In some specially equipped buses, some of the seats had folding tables and table lamps.

The GDR imported this type of bus from 1956. Together with the Ikarus 66, well over 8,000 vehicles were delivered to Germany, of which 717 Ikarus 55s still existed in September 1988. Because of the protruding rear end and the somewhat gurgling, loud engine noise, the buses were popularly known in the GDR as “cigars”, “rockets” or “vacuum cleaners”. 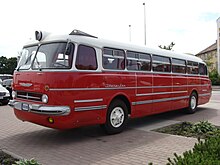 In the sixties, the Ikarus Lux was built as a variant of the Ikarus 55, which has a striking central light on the front on the roof. In Estonia, the 30-seat bus was not seen as luxurious, but it was more comfortable than some of the Soviet buses of the time.