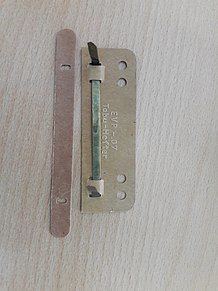 The file dulli , as it was originally called, was created on July 8, 1938 by Georg Heinrich Laufer from Frankfurt a. M. registered as a utility model under the number 1440592 with the title "Aufreiher für Blattsammlungen, with a springy middle part". As early as July 22, 1938, Kurt Wolff, also from Frankfurt a. M., rewritten. On October 15, 1941, the utility model was transferred to the Chemnitz company Carl Kohl "Dulli Bürotechnik" in Langestrasse 10 and successfully marketed by them. Many publications incorrectly refer to Paul Richard Carl Kohl as the inventor.

The original name Aktendulli, or Dulli for short, is still widespread, especially in the area of ​​the former GDR .

In addition to other synonyms such as filing strips, filing strips, clip-on filing strips, Köster strips or filing tabs, various colloquial terms or other spellings such as little brother, fly or filing dulli (see photo) are used. The company “Praktikus Gesellschaft für Neuzeitliche Büroartikel mbH” in Meinerzhagen was also granted a patent in 1956 for “clip-on adhesive strips for folders”, from which the generic name “Praktikus” is derived.