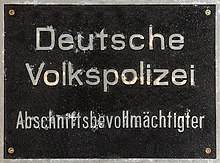 A section authorized representative (ABV) in the GDR was a police officer of the People's Police (VP), who was responsible for police tasks in communities, city districts and on sections of the Reichsbahn. In his section he was the police contact for the residents and was on patrol duty . He was responsible for receiving and forwarding criminal charges and police prevention . The ABV had similar tasks as a current police contact area officer . He held the rank of sub-lieutenant or lieutenant.

In addition, the ABV was responsible in its section for traffic controls, controls of compliance with the reporting obligation ( house books ) and external visitors as well as the control of state-mandated persons. He gave assessments about residents of his section, for example when a decision should be made about the re-issuance of a driving license after a ban or the approval of a trip to the non-socialist economic area . For the approval of such trips, the assessments of the ABV were viewed by the responsible employees of the Ministry for State Security and they served as the basis for approval or denial.

The ABV were introduced from October 1952 based on the Soviet model. The number of ABVs varied as follows: