The Cologne bicycle stadium from above (2017)

Memorial plaque for Albert Richter at the Radstadion Cologne, designed by John Bachem

The Radstadion Köln is a sports facility opened in 1996 in the Müngersdorf district of Cologne . The railway belonging to this officially bears the name Albert-Richter-Bahn .

The cycling stadium now holds 2500 spectators and is partly covered. The track, which is elevated between 13 ° and 43 °, is designed for speeds of up to 85 km / h. It consists of the valuable and rare tropical wood Afzelia , as it is particularly weather-resistant. The use of this tropical wood led to political disputes in the city council during construction .

The stadium and cycling track were designed by the Münster architects Herbert and Ralph Schürmann.

The 110th German Railway Championships were held there in 1996 for the ceremonial opening of the cycling stadium . In 1998 the scoreboard from the now demolished Cologne sports hall was installed in the cycling track.

The bike stadium was owned by the city of Cologne until 2001, after which it was transferred to the city's own company " Kölner Sportstätten GmbH ".

In May 2019, the state government of North Rhine-Westphalia decided to extensively modernize the Cologne cycling stadium and expand it into a track cycling center. The application for the award was again based on plans by the Schürmann family of architects. The hall should be roofed over so that training is also possible in winter. A building is to be built on the east side for athletes and coaches. In addition, the new hall should be suitable as a multifunctional hall for several sports. Here top and young athletes are to be promoted, school and university sports take place and students of the German Sport University train and research. 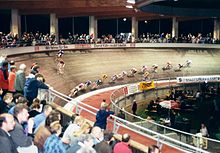 Cycle race on the Albert-Richter-Bahn

A citizens' initiative led by the journalist Renate Franz and the later mayor of the city ​​center, Andreas Hupke , succeeded in naming the track in the cycling stadium after Albert Richter when it opened in 1996 . The Cologne cyclist was allegedly murdered by the Gestapo in Lörrach prison in 1940 . In 1932 Richter won the amateur sprint world championship in Rome ; in the Velodromo Maspes-Vigorelli , which Herbert Schürmann's father, Clemens Schürmann , designed for the World Championships .

Although officially only the track bears the Richters name, this separation has not prevailed in common parlance, which is why the term "Albert-Richter-Radstadion" is often used.

In total there have been at least nine cycle racing tracks in Cologne since 1889.

The first was the "Radrennbahn am Zoologischer Garten", better known as the " Riehler Radrennbahn ". It was built by the “1. Bicycle Club Köln ”, a cycling club that was founded in 1880 on the initiative of the tire manufacturer Clouth . The runway was inaugurated in 1889 on an area that is now part of Cologne Zoo . At the same time, the “International Sports Exhibition” took place in Cologne's Flora . The track was 333 m long, 9 m wide and had a 4.20 m elevation. The first race, still on high wheels, was won by Heinrich Kühbacher from Cologne, who later became known as "Knallkünning" ("Knallkönig") because he gave the starting shot for track races in Cologne until the 1950s.

On September 6, 1908, the European championship over 100 kilometers was held on the track; at the start was the future world champion Peter Günther . On September 8, 1913, two athletes had a fatal accident on the Riehler Radrennbahn, the racing driver Richard Scheuermann and the pacemaker Gus Lawson, brother of the racing driver Iver Lawson . On July 21, 1931, the German pacemaker Werner Krüger had a fatal accident on the train.

Around 1900, the "Stadtwaldbahn" (Stadtwaldbahn) was laid out in the Cologne city forest in Lindenthal. It was 400 meters long, consisted of ash and sand and had no noticeable incline. Originally it was just a park path that led around tennis courts. The races that take place here were particularly popular because of the idyllic location of the track. Up to 20,000 spectators came to the races and built the grandstands themselves from chairs, boards and ladders; It is also reported that the fans arrived with chairs and picnic baskets on Saturday evenings in order to secure the best seats for the races on Sunday morning. The last race took place in 1923. (former location of the Stadtwaldbahn)50.93225 6.8978666666667

The direct predecessor of the Albert Richter Radstadion was the "Müngersdorfer Radrennbahn", which stood in the same place and was the only one in Cologne owned by the city. The 400-meter-long wooden runway, designed by the Dresden engineer Edmund Heller, was opened in 1923, and four years later the competitions of the rail world championships took place on it , for which it had been modernized and expanded again: the wooden runway was replaced by one made of concrete replaced, grandstands were expanded and lighting was installed. After the Second World War, races - mainly standing races - took place as early as 1945. In a race with several nations in 1949, Jean Schorn from Cologne won . Since there was still no official national anthem, the Cologne hit We are the natives of Trizonesia by Karl Berbuer was heard .

In 1954 the track world championships were held in Müngersdorf - apart from the standing races that took place in Wuppertal in the "Stadion Am Zoo". 1971 was the last cycle race on this track. In the 1960s, the home games of the regional division (second division) SC Viktoria Köln and SC Fortuna Köln were played on the playing field inside the cycling track . During the construction phase of the neighboring Müngersdorfer Stadium from August 1971 to November 1975, 1. FC Cologne also played its Bundesliga home games there. For this purpose, the capacity of the cycling track was increased from 15,000 to 29,000 spectators. A wooden grandstand was erected on the opposite stand and spectator seats were built over the cycling track itself. As a result, there was no longer any possibility of holding cycling races there, the track was demolished in 1981 and construction of the new cycling track began in 1990. (Former location of the Müngersdorfer Radrennbahn and today's Radstadion Cologne)50.936259 6.872196 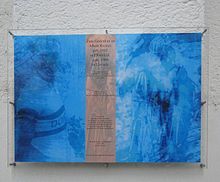 Memorial plaque for Albert Richter
at the Rhineland Hall in Cologne-Ehrenfeld
Design: U. Schnackenberg

In 1928 the first covered cycling track in Cologne (length 166.66 meters, designer Clemens Schürmann) was opened in the Rheinlandhalle , where the Cologne six-day races took place from 1927 to 1933 . During the war the hall was badly damaged and the railway disappeared into the sinking; today there are shops in the hall. a. a bicycle discounter. Since Albert Richter's cycling career began in the Rheinlandhalle, there is a memorial plaque on it for him. (Location of the Rheinlandhalle)50.950258333333 6.91445

After the Second World War , Cologne received a covered cycling track for the second time, in the sports hall on the grounds of the KölnMesse . The wooden track was expandable, 166.66 meters long and had a curve superelevation of 54 degrees. It was designed by Herbert Schürmann. The six-day races and the races for the Silver Eagle of Cologne took place on this track from 1958 to 1997 . The sports hall was demolished in 1999 and the wooden track donated to the Murjani Sports School in Latvia. However, it was not built there until 2011. (former location of the sports hall)50.945909 6.980739

Map with all coordinates of the Cologne racecourses: OSM | WikiMap