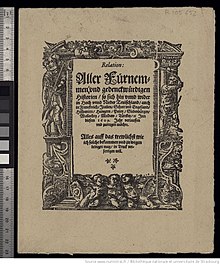 Title page of the German relation from 1609, the first newspaper in the world

This list of the oldest newspapers lists the newspapers in the world sorted according to the date they were founded; a distinction is made between world regions. The first newspapers emerged in early modern Europe , when printed periodicals quickly ousted the handwritten information sheets that had been common until then . The emergence of the press can be seen in connection with the simultaneous expansion of book printing , from whose printing press it derives its name.

Apart from its appearance as a printed work , the other typical features of a newspaper are:

The following entries represent a selection: