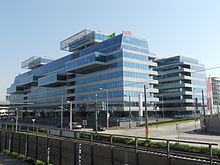 The headquarters of the ÖGB in Vienna 2. , Johann-Böhm-Platz 1 (right), corner of Handelskai (left)

The Austrian Federation of Trade Unions is a non-partisan interest group for employees founded in 1945 . It is constituted as an association and is divided into seven sub-unions . It is traditionally dominated by the parliamentary group of social democratic trade unionists . During the time of the corporate state 1934–1938 there was an organization with a very similar name that was dependent on the dictatorship and was not democratically constituted.

See also: List of trade unions in Austria , on history

The designation partial trade union is more appropriate for the trade unions of the ÖGB today than the designation specialist trade union , since today the division is not completely based on economic groups , but functions much more complex:
This is how the trade unions (i.e. those trade unions that are responsible for certain parts of economic life ) to only take care of the workers in their factories, while the GPA took care of the employees .
Furthermore, the public service unions (GÖD, YOUNION) not only look after state employees , but also the companies outsourced from the state environment, if they do not have their own unions (such as GPF, formerly GdE).
In the current structure, the traditionally strong separation between blue-collar and white-collar workers in Austria is no longer maintained, and (small) entrepreneurs and other forms of new employment relationships are integrated into the union representation.

The ÖGB as an entrepreneur

As of December 31, 2012, the ÖGB owned shares in ÖGB Liegenschaftsholding GmbH (100 percent subsidiary), which was established in 2009, and 51 percent of the shares in the after the sale of 49 percent to the Austrian Trade Union Solidarity Private Foundation (ÖGSP) in 2009 ÖGB Beteiligungsgesellschaft mbH

Until the 1980s, the ÖGB was the largest private banker in Austria ( BAWAG ). In 2006/07, as a result of the BAWAG affair , which led to the resignation of the ÖGB board, the ÖGB parted completely from the bank and sold it to the US investor Cerberus.

The leadership of the ÖGB is organized according to parliamentary groups. The parliamentary groups have close ties to the respective political parties . The group of Social Democratic Unionists ( FSG ) is the strongest group and holds the most top positions. Wolfgang Katzian from the GPA-djp was the chairman until June 12, 2018 , and Rainer Wimmer was elected as his successor . The FSG has a close relationship with the SPÖ . The second largest parliamentary group is the Christian Trade Union Party ( FCG ), which is close to the ÖVP and dominates the public service union . Then there are the independent trade unionists in the ÖGB ( UG ), the faction of party-free trade unionists , the freedom workers ( FA ) and the faction of the trade union left bloc ( GLB ).

In addition to the sub-trade unions and parliamentary groups, the ÖGB is also organized in departments, for example the youth department ( ÖGJ ), which is active in almost every union.

In addition, there is a division into national organizations, which is also continued in most unions.

Fritz Verzetnitsch was President until March 27, 2006, but after the so-called " BAWAG scandal " became known, he resigned from all trade union and political functions and was dismissed by the ÖGB on May 2, 2006. As his interim successor until the next federal congress in 2007, Verzetnitsch commissioned the previous Vice President Rudolf Hundstorfer , who was also officially confirmed at this congress. From December 1, 2008, Erich Foglar was President of the ÖGB. On June 14, 2018, Wolfgang Katzian was elected President of the ÖGB, while Norbert Schnedl was confirmed as Vice President . Korinna Schumann , who succeeded Renate Anderl in this function , became the new Vice President .

The internal democracy of the ÖGB association is not pronounced. The members in the companies and departments have no direct right to vote because the results of the last works council or employee representative elections are also passed on one-to-one to the trade union bodies. Ultimately, therefore, non-members also determine the composition of the union bodies. The structure of the ÖGB is also strongly centralized. In the past, this also meant that an outgoing president could choose his successor (Benya “determined” Verzetnitsch). The choice was then a mere formal act.

The ÖGB is a member of the social partnership and, with its large number of members, has great influence on economic and social policy. Its once considerable economic power (see section “The ÖGB as an entrepreneur”) has been greatly reduced: BAWAG was sold in 2006/2007 and the Ruefa travel agency was bought by the Austrian Tourist Office in 2005 .

The ÖGB headquarters are located in Vienna 2nd , Johann-Böhm- Platz 1, at the corner of Handelskai 348, in the building of an ÖGB subsidiary, in the immediate vicinity of the Donaumarina underground station of the U2. At the beginning of 2010, the ÖGB moved to this new headquarters with the trade unions ProGe, Bau-Holz, vida, the Union of Post and Telecommunications Services and the Association of Austrian Trade Union Education (VÖGB), the ÖGB-Verlag and the travel company Sotour Austria. Before that, the ÖGB head office was in Vienna 1. , Hohenstaufengasse 10-12 for decades .

The membership of the ÖGB reached its peak in 1981 at 1.677 million and subsequently fell significantly (see graphic). The BAWAG scandal reinforced this tendency. In 2013 the number of union members fell below 1.2 million. At the end of 2014, a total of 1,198,071 people were registered as members in seven individual unions.

Due to the constant increase in the number of employees in Austria, the “degree of organization” (the percentage of employees who are members of the union) has been steadily decreasing in recent years, despite the fact that the absolute number of members has remained almost the same. Compared to 1981, the level of organization has almost halved from then 60% to only 32%.

Even before the formal establishment of the corporate state (1934–1938), the Dollfuss dictatorship founded the union federation of Austrian workers and salaried employees on March 2, 1934 , after the social democratically oriented free unions had been banned. Its president, who was not democratically determined, was the Christian social worker Johann Staud . The organization was to be seen as the “fig leaf” of the dictatorship against the workers, it did not develop any noticeable effectiveness and was not recognized as a forerunner by the ÖGB, founded in 1945.

In the course of the first ÖGB federal congress in 1948, 16 trade unions were founded. The number of organizational units called sub-unions today had been reduced to seven by mergers by 2011.

Presidents of the ÖGB (see below) also held high state offices: Johann Böhm was Second President of the National Council, Anton Benya President of the National Council. Others were appointed federal ministers after their ÖGB presidency: Franz Olah as Minister of the Interior, Rudolf Hundstorfer as Minister of Social Affairs. Two presidents resigned from high offices in disagreement: Olah was dismissed as interior minister in 1964 and expelled from the SPÖ , Fritz Verzetnitsch had to resign as ÖGB president in 2006 because, without the knowledge of the ÖGB presidium, he was liable for the ÖGB for the tailspin " Union Bank “ BAWAG PSK had taken over.

From 2008 to 2019 Bernhard Achitz was Senior Secretary of the ÖGB. On June 25, 2019, Willi Mernyi and Ingrid Reischl were appointed by the ÖGB federal executive board as senior secretaries of the ÖGB.

President of the ÖGB 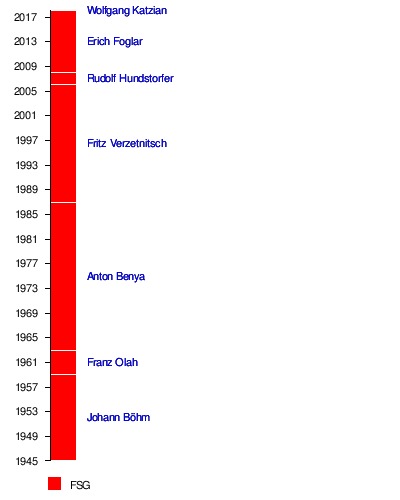