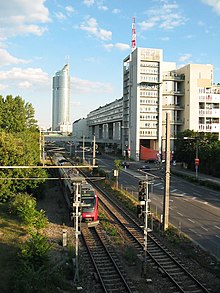 The Handelskai and the Donauuferbahn , in the background the Millennium Tower

The Handelskai is around 8.5 kilometers long and is one of the longest streets in Vienna . It runs along the right bank of the Danube in the 20th district of Vienna, Brigittenau , and in the 2nd district, Leopoldstadt .

The Handelskai begins at the lock bridge of the Nussdorf weir and lock system in the 20th district, is interrupted by the motorway junction at the north bridge and ends at the junction of Aspernallee in the 2nd district, where it leads directly into the port access road and then into Freudenauer Hafenstrasse passes that ends at the Freudenauer Hafenbrücke towards Simmering . Almost the entire street is part of the B 14 state road running through Vienna and Lower Austria .

For almost its entire length (with the exception of the north of the north bridge, where the railway runs inland from the road), the Danube Bank Railway separates it from the Danube River and a promenade running along the bank. The Handelskai passes under all of Vienna's Danube bridges . The bridges from Handelskai to the historical bridge locations were designed in the manner of a square ( Friedrich-Engels-Platz at Floridsdorfer Brücke , Mexikoplatz at Reichsbrücke ).

Blocks of houses in the usual sense can only be found on the side of the street closer to the center (the train runs on the other); On a city map from around 1900, a total of forty (partly planned) blocks of houses were drawn in, including many factory sites (e.g. several leather factories).

From left to right: lanes of the Handelskai, Donauuferbahn with the S45 train leaving the Wien Handelskai station , Promenade am Donaudamm, Danube

(listed in the direction of flow of the Danube)

Until 1945 there was modest passenger traffic with a few stops on the Donauuferbahn, which ran next to the Handelskai and was largely opened in 1876 . Demands made by the opposition in the last 20 years to extend the S45 to the Stadlauer Ostbahnbrücke have not yet been met.

The shipping company Erste Donau-Dampfschiffahrts-Gesellschaft has its headquarters ( shipping center ) on the Handelskai near Reichsbrücke and Mexikoplatz. Other shipping companies use passenger from Handelskai made accessible transhipment sites .

Municipal warehouses on Wiener Handelskai, opened in 1876 . Franz Kollarz: Drawing Over Land and Sea (around 1880)

The Handelskai was built in the course of the Danube regulation , which was completed in 1875 and straightened the river bed . It was officially named in 1884. The name refers to the warehouses, ship moorings and quays on the Danube bank (some of which still exist today).

According to historical city plans, the name was originally used for the immediate banks of the Danube north and south of the Reichsbrücke, which were converted into quays. Later the name was transferred to the thoroughfare along the Danube riverbank. The quays themselves were given different names, but these are only used by experts and on city maps. The street and the quays are still referred to as the trading quay by the public.

When the Danube flooded, the Handelskai was sometimes flooded, as was the Danube Bank Railway, the last time in 1975. With the second Danube regulation, which ended in 1988, flood protection on the right bank of the Danube was improved so that flooding has not taken place since then.