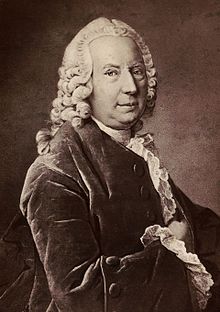 Daniel Bernoulli (born January 29 . Jul / 8. February  1700 greg. In Groningen ; † 17th March 1782 in Basel ) was a Swiss mathematician and physicist from the academic family Bernoulli . He worked with Leonhard Euler on the equations that bear their names. The Bernoulli equation named after him is of paramount importance in hydraulics and aerodynamics .

From the age of 16 Bernoulli studied medicine in Basel and moved to Heidelberg in 1718 . After a stay in Strasbourg in 1719 , Bernoulli returned to Basel. There he obtained his doctorate in the following year. med. Since he was not offered a call from any university, Bernoulli went on a study trip to Venice in 1723 to study with the city physicist Pietro Antonio Michelotti . During his assistance there, Bernoulli made the acquaintance of the Pharo card game .

He made his debut as a mathematician with a booklet about this card game; with work on the Riccati equation , he became known throughout Europe. In 1725 Bernoulli and his brother were appointed to the Russian Academy of Sciences in Saint Petersburg . In a letter to Christian Goldbach on October 6, 1729, Bernoulli was the first to give a possible representation of the gamma function. Bernoulli did not like town, country and work at all, so in 1733 he took an illness as an opportunity to return home. In the same year he became an honorary member of the Russian Academy of Sciences. He returned to Basel and taught at the university for the rest of his life. In 1733 he took over the chair for anatomy and botany and ten years later switched to a chair for anatomy and physiology. But in 1750 Bernoulli's dream came true when he was entrusted with the chair of physics. He was the rector of the university twice (1744 and 1756) . In 1746 he was accepted as a foreign member of the Royal Prussian Academy of Sciences in Berlin . In 1748 he became a member of the Académie des Sciences .

Apparently he had a bad relationship with his father. When both took part in a scientific competition at the Academy of Sciences in Paris and shared first place, Daniel was cast out by his father, who allegedly could not bear the shame of being compared to his son. Bernoulli has won this award ten times.

In 1738 he published his main work Hydrodynamica . His father Johann published the research results contained therein under the title Hydraulica as plagiarism by postponing it by seven years. Despite Daniel's attempts at reconciliation, the rift between him and his father remained.

Bernoulli was a contemporary and close friend of Leonhard Euler's .

His earliest mathematical work was Exercitationes , published in 1724 , which contained a solution to the Riccati equation proposed by Jacopo Riccati . Two years later, he first pointed out the often desired decomposition of a compound movement into translational and rotational movements. The structure is similar to Lagranges Méchanique Analytique , as all results appear as the consequence of a single principle, in this case the conservation of energy .

This was followed by the memorandum Traité sur le flux et le reflux de la mer on the theory of tides , for which he received a prize from the French Academy in 1740 - alongside Euler, Antoine Cavalleri and Colin Maclaurin . The writings of Maclaurin, Euler, and Bernoulli contain everything that has been done on the subject between the publication of Isaac Newton's Principia and the research of Laplace . Antoine Cavallieri's essay deals with René Descartes' theory based on aether vortices .

Bernoulli also wrote a large number of articles on various mechanical issues, particularly problems related to vibrating strings and the solutions given by Brook Taylor and d'Alembert . He is the first to try to formulate a kinetic theory of gas particles and to apply it to explain the Boyle-Mariotte law associated with the names of Robert Boyle and Edme Mariotte .

After his death, Daniel Bernoulli was buried in the Church of St Peter in Basel. His epitaph comes from the Bernese sculptor Johann Friedrich Funk .

In Basel in 1875 a bust was erected in honor of Daniel Bernoulli at the entrance to the Bernoullianum.