Colin Maclaurin (February 1698 in Kilmodan , Argyllshire , Scotland , † June 14, 1746 in Edinburgh ) was a British mathematician , geodesist and geophysicist from Scotland.

Colin Maclaurin was the pastor's son in the village of Kilmoden on the Ruel River. His father died when he was six weeks old and his mother in 1707. Maclaurin was then attending school in Dumbarton and, after his mother's death, moved to live with his uncle in Kilfinnan . From 1709 he studied at the University of Glasgow , including the elements of Euclid, and in 1712 he completed his Magister Artium with a thesis on Newton's theory of gravity. He then began studying theology, but broke it off and studied mathematics for himself while he was living with his uncle again. In 1717, at the age of 19, he became a professor in Aberdeen after passing an examination as the best. In 1719 he visited London, where he met Newton and was inducted into the Royal Society . He then accompanied Lord Polham's son on his Grand Tour through Europe for two years , where he received the Grand Prize of the Académie des Sciences in Paris . However, since he had not asked the university for permission, he ran into problems after his return to Aberdeen, although he was reinstated as a professor. From 1726 he became professor in Edinburgh with a recommendation from Newton , where he stayed for the rest of his career. In 1740 he was again awarded the Academie des Sciences prize (together with Euler and Daniel Bernoulli ) for a thesis on tides. In 1745 he was actively involved in the defense of Edinburgh against the Jacobites. After conquering the city, he fled to York (at the invitation of the Archbishop) and returned to Edinburgh in November. The hardships in the middle of winter made him sick and he died the following year. 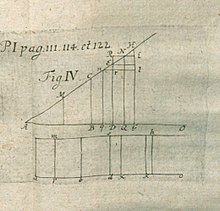 Maclaurin wrote his most important work A treatise of fluxions in 1742 , one of the first systematic representations of Newton's calculus, written in response to George Berkeley's criticism of the foundations of analysis. He was the inventor of the Trisektrix named after him and the Maclaurin series named after him (in his Treatise on fluxions ), which, however, is only a special case of the Taylor series (Maclaurin also makes reference to Taylor). He was also involved in the development of the Euler-Maclaurin formula (which appeared in his Treatise ) and established the Maclaurin inequality . Maclaurin also dealt with actuarial mathematics and, for example, with the geometry of honeycombs.

Maclaurin made important contributions to theoretical geodesy and geophysics . He investigated the theoretical shape of the earth through calculations on a homogeneous ellipsoid , which was later named after him Maclaurin's ellipsoid . He also calculated the attraction of two ellipsoids.

He had been married to Anne Stewart since 1733, with whom he had seven children, of whom only five survived.

Together with his friend James Douglas , Maclaurin was instrumental in founding the Society for Improving Arts and Sciences , the forerunner of the Royal Society of Edinburgh , whose founding president was Douglas in 1737.

A crater on the moon and the asteroid (13213) Maclaurin are named after him.

Maclaurin, portrait from his Treatise on fluxions