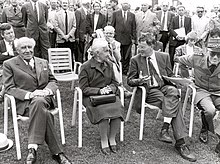 Edgar Bonjour (left), next to Jeanne Hersch and Kaspar Villiger

Edgar Bonjour (born August 21, 1898 in Bern , † May 26, 1991 in Basel ) was a Swiss historian . Bonjour is considered an old master of Swiss history. He was best known for the multi-volume history of Swiss neutrality and the Bonjour report to the Federal Council .

Edgar Bonjour came from a French-speaking family and grew up in Bern, where he went through schools and studies, with the exception of a semester in Geneva . His most important teacher was Richard Feller . Bonjour received his doctorate in 1923 with the work The Peasant Movement of 1525 in the State of Bern . After stays in Paris and Berlin , he taught at the municipal high school in Bern . He then worked from 1933 to 1935 as Vice Director of the Swiss Federal Archives. In 1935 he completed his habilitation at the University of Bern on the subject of The Prehistory of the Neuchâtel conflict .

In times of political exposure, two chairs in history at the University of Basel became vacant in quick succession: on February 12, 1934, the professor of general modern history, Emil Dürr (born 1883), had a fatal accident, and on June 4, 1934 Hermann Bächtold died (born 1882), professor of Swiss history. In view of the National Socialist threat, non-Swiss candidates were not considered in the selection process. At the beginning of May 1935 Edgar Bonjour was appointed to the chair of "Modern World History and Swiss History", and at the end of June Werner Kaegi to the chair of "General Medieval and Modern History". They complemented each other excellently and gave an account of their subject and their work on the university's anniversary in 1960. In 1946 Edgar Bonjour became its rector and remained loyal to the university until his retirement in 1968 and beyond. So from 1980 he resumed lecturing to a limited extent. Bonjour also worked at the adult education center and senior university until the last years of his life, attracting a large audience. He held his last lecture as part of the regular teaching program two weeks before his death on May 26, 1991.

Bonjour's life theme became the history of Swiss neutrality. After a first smaller work in 1943, he developed the topic in several stages between 1965 and 1970 into a six-volume monumental work, with the last three volumes, which he wrote on behalf of the Federal Council from 1962, entered Swiss historiography as the Bonjour report . Bonjour undertook this task on condition that his report, whether published or not, would never be censored . In order to maintain his independence, he waived any compensation. Three more volumes with documents from the war period followed by 1976 and a short version in 1978. Bonjour published numerous articles on the subject in the author's magazine Schweizer Monatshefte .

Bonjour also worked on other areas of Swiss history , and various publications followed. The two-volume overview of the writing of history in Switzerland, written together with Richard Feller, also became a basic work. Other publications by him deal with the formation of the Swiss federal state (1948), Basel's membership in the Confederation (1951) and the history of the University of Basel (1960). In 1950 he published a paper about the well-known surgeon Theodor Kocher , the grandfather of his wife Dora Kocher (2nd edition 1981). In addition, he has written numerous articles for historical magazines and regularly articles in daily newspapers. Bonjour also made numerous contributions to the New German Biography , which was later followed by a few biographical articles for the Historical Lexicon of Switzerland .

With Werner Kaegi, Bonjour made a decisive contribution to shaping an entire generation of historians. He was awarded honorary doctorates from the University of Neuchâtel and the St.Gallen Business School . In addition, he was accepted into the historical commission of the Bavarian Academy of Sciences in 1965. Together with Alfred Remigius Weber and Max Burckhardt , Bonjour was made an honorary member of the Historical and Antiquarian Society in Basel in 1990.

The estate of Edgar Bonjour was that of his heirs in 2004 State Archives of Basel-Stadt passed. In addition to the scientific work, you will find material on his work as a university teacher, his lectures, speeches and interviews on current issues, as well as personal papers. There is also material that documents his work for the Basel Chamber Orchestra and its founder Paul Sacher . The estate is open to the public.