The Basel-Stadt State Archives in Basel have the statutory task of taking over the archival-worthy documents of the public organs of the canton, making them accessible, storing them securely and making them available for use. It supports the research and publication of the archive material . Organizationally, the State Archives belong to the Presidential Department.

The oldest archival material in the State Archives, a monastery document, dates back to 1098. The city archive was destroyed in the Basel earthquake of 1356. Since then, the administrative activity in most areas has been passed down densely.

The holdings are divided into the following groups:

The online archive catalog offers numerous research options. Selected image and film documents as well as around 420,000 pages of written documents can be viewed online via the archive catalog. The library holdings and the cantonal printed matter can be searched using the IDS library catalog . 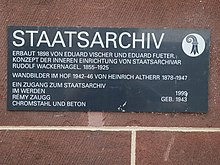 The city of Basel had had a collection of deeds and documents since the 12th century. The archive system underwent a radical renewal in the middle of the 18th century. When the former canton of Basel was separated and the assets were divided up in 1833/1834, the two new half-cantons of Basel-Stadt and Basel-Landschaft were each awarded those files that related exclusively to their territory. All documents relating to the entire old canton of Basel remained in the Basel-Stadt State Archives as joint property. In 1877 the post of state archivist was created. The lawyer Rudolf Wackernagel was appointed the first state archivist . He led the reorganization of the archive holdings, which was completed in 1904 with the publication of the so-called repertory in 1904 and the establishment of a plan archive. 1960/1961 was made the transition from pertinence - the principle of provenance . Heinrich Altherr painted the murals from 1942–1946.

The state archive was created in 1898/1899 as an extension of the Basel town hall . It is considered to be the first purpose-built archive building in Switzerland. Remodeling and renovation work in the 1960s mainly created more storage space. An external storage facility has been available to the State Archives since 1981. In 1993 the company moved into a second branch.

In 1998/1999 the main building on Martinsgasse was extensively renovated by the architects Vischer + Partner, in the course of which an art in construction contract was also awarded to the Swiss conceptual artist Rémy Zaugg . Zaugg's project is entitled An Access to the State Archives and consists of 14 concrete slabs placed on the gravel entrance, which connect Martinsgasse with the cloister of the historic building via a kind of footbridge. Every single one of these floor panels is provided with words made of chrome steel, with these word inlays (DIE AIR, DER BACH, WILL, DAS BRAIN, etc.) reflecting in a poetic way the function and use of the State Archives as a repository for knowledge about the city.

In May 2019, the voters of the canton of Basel-Stadt confirmed that the State Archives, together with the Natural History Museum Basel , should move into a new building on the area of the Basel St. Johann train station . The building should be built from 2020 and ready for occupancy in 2023.

Commons : State Archives of the Canton of Basel-Stadt  - collection of images, videos and audio files