As Ruhr Statute is that on 28 April 1949 by the United Kingdom , France , the United States and the Benelux countries on the London Six-Power Conference adopted Convention on the Establishment of an International Authority for the Ruhr (Engl. Agreement for an International Authority for the Ruhr , French. Accord instituant l ' Autorité Internationale de la Ruhr ). The Soviet Union unsuccessfully requested participation in this intended supervisory body and saw the Ruhr Statute as a sign of the Cold War . The object of the Ruhr Authority, the production of the Ruhr area of coal , coke and steel to oversee, to distribute on the German and the international market and at the same time to prevent economic concentration. The authority began its work in Düsseldorf in the summer of 1949 .

The agreement established a right of supervision over the west German heavy industry. The Ruhr Statute was the answer to the Ruhr question raised by France's Prime Minister Charles de Gaulle in 1945 and placed on the international agenda. Answering them opened the way for a West German state to be founded in accordance with the Frankfurt documents . The purpose of the Ruhr Statute was to guarantee European security and to promote economic cooperation between European states. With the Petersberg Agreement of November 22, 1949, the federal government under Konrad Adenauer joined the Ruhr Statute. After the establishment of the coal and steel union, the Ruhr Statute was repealed on October 19, 1951 with a dissolution agreement.

The statute stipulated the legal framework for the International Ruhr Authority , which was established by the contracting parties. The entire coal, coke and steel production was subordinated to this control authority, which stipulated the type, quantity and use of the armament- related products. No definitive provisions on the German coal and steel industry on the Ruhr were made in this agreement . Such resolutions had to be passed by the authority in votes for which a right of veto was not provided. It was also planned to link the Ruhr authority with the planning of the OEEC , the Paris authority for economic cooperation between the states of the Marshall Plan .

Marion Countess Dönhoff wrote in January 1949 in a comment on the front page of Die Zeit on the importance of the Ruhr Statute:

"In every modern economy you can control the basic materials: coal, steel and pig iron practically the entire economy."

Countess Dönhoff saw the danger that British and French representatives in the International Ruhr Authority could use their votes to prevent unpleasant German competition in the coal and steel industry from growing again. But at the same time she said as early as 1949 that the new institution could

"[...] to become the nucleus of a new European economic conception and design."

The Ruhr Statute was legally based on the law of the occupation situation . Even if there was a German translation of the text of the agreement, its binding versions were either the English or French text. The official languages ​​of the Ruhr Authority were English and French. 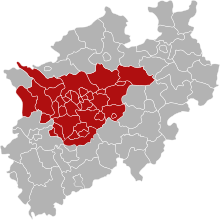 As Ruhr the Ruhr area, but also some adjacent counties, as well as the industrialized cities of Bergisch country and the Dusseldorf area defined in the annex to the Ruhr Statute. In a west-east direction, the area extended to the maximum extent of the Ruhr coal district settlement association, from the district of Geldern on the Dutch border to the district of Unna and further to the district of Beckum in the eastern Münsterland. In the latter there was coal mining in Ahlen and Heessen . The northernmost point of the area was in the Rees district, the southern end was the Düsseldorf – Remscheid line.

The following were named in detail in the annex: the areas of the urban districts of Bochum , Bottrop , Castrop-Rauxel , Dortmund , Duisburg , Düsseldorf , Essen (in the draft agreement: district of Essen), Gelsenkirchen , Gladbeck , Hagen , Hamm , Herne , Iserlohn , Krefeld (in the draft: District of Krefeld-Uerdingen), Lünen , Mülheim ad Ruhr , Neuss , Oberhausen , Recklinghausen , Remscheid , Solingen , Wanne-Eickel , Wattenscheid , Witten and Wuppertal , as well as the districts of Beckum , Dinslaken , Düsseldorf-Mettmann , Ennepe-Ruhr -Kreis , Geldern , Iserlohn , Lüdinghausen , Moers , Recklinghausen , Rees and Unna , each in the inventory from 1949.

The authority consisted of a council composed of representatives of the signatory governments and the Federal Republic of Germany. The following were represented in the Council: Belgium, the Netherlands and Luxembourg with one vote each, the United States, the United Kingdom, France with three votes each and, following its accession to the agreement, the Federal Republic of Germany, also with three votes. In total there were 15 votes. As a rule, decisions were adopted with a majority of eight votes. Representatives of the signatory states each presided over the council for six months. France was represented in the Council from 1950 to 1952 by Alain Poher , who was also President of the Council for a time.

The council was supported by a secretariat headed by a general secretary. The Belgian lawyer and UN politician Georges Kaeckenbeeck became General Secretary of the Ruhr Authority .

Seat of the authority

Atlantikhaus , today the Ministry for Building, Housing, Urban Development and Transport of the State of North Rhine-Westphalia , 2012

According to the Ruhr Statute, the seat of the authority should be determined by the council in a place in the state of North Rhine-Westphalia. The authority was based in Düsseldorf in the Atlantikhaus of the former Oberfinanzdirektion in Kavalleriestraße (today Jürgensplatz 1), which had already been used by British occupation authorities.

Accession of the Federal Republic of Germany to the Ruhr Authority

Article 9 of the Ruhr Statute allowed the federal government to join. Initially, however, only one German observer was admitted to the International Authority for the Ruhr . After the Petersberg Agreement was concluded , the Federal Government sent representatives to the Ruhr Authority with voting rights. Adenauer suggested in autumn 1949 that one of the three German representatives should be a trade unionist. The German delegation began its work on December 17, 1949. German representatives at the International Ruhr Authority were Federal Minister Franz Blücher , a member of the FDP, then Heinz Potthoff , social democrat and as a trade unionist a member of IG Metall , previously Blücher's deputy, and finally, from November 1951 Ludwig Partl , as Potthoff became the high authority of the newly founded Coal and Steel Community should change.

According to Monnet's design from 1946, the Ruhr area and the neighboring region were to be separated from Germany
→ Main article : Ruhr question

After the end of the Second World War , the occupying powers , above all the British occupying the Ruhr area , demanded that the “armory of the German Reich” be rendered harmless. The other victorious states also initially pursued this goal: France demanded, based on Jean Monnet's plans , the separation of the Ruhr area from Germany; the Soviet Union wanted to place the coal and steel region under international control, and the United States demanded special control over the Ruhr area.

When the state of North Rhine-Westphalia was founded in 1946, the Ruhr area was largely withdrawn from the influence of France and the Soviet Union. Despite partial production restrictions and bans and despite dismantling , steel production on the Ruhr was resumed. The Americans in particular soon realized that raw materials and products from Germany's most important industrial region were indispensable for the reconstruction of the war-torn country. In the course of 1948, steel production in the bizone exceeded that of France.

With the plans to found the Federal Republic and the transfer of state sovereignty to West Germany, France renewed its demand for control of the arms-related industry in the Ruhr and thus a restriction of the sovereignty of the West German state. At the same time, however, the integration of the German economy in a European economic system should be ensured, as it was in accordance with the Potsdam Agreement and the goals of the Marshall Plan . In this situation, the representatives of Belgium, France, Luxembourg, the Netherlands, the United Kingdom and the United States of America published the London Communiqué on December 28, 1948, with a draft agreement on the establishment of an International Ruhr Authority. The agreement itself was finally ratified by the signatory governments in April 1949, around a month before the Basic Law came into force .

Dismantling: Division of the German industrial facilities. Between March 31, 1946 and August 1947, 11,100 tons of German industrial plants were brought from the western occupation zones to the Soviet Union. At the end of 1950 dismantling was finally stopped in the Federal Republic.

In May 1950, the French Foreign Minister Robert Schuman presented his plan to place Franco-German coal and steel production under a joint supreme supervisory authority. This organization should be open to other countries to join. Jean Monnet was involved in the development of the plan. The French Foreign Minister was in contact with Georges Kaeckenbeeck prior to the announcement.

The Ruhr Statute met with clear criticism on the German side. The GDR , like the Soviet Union, saw in the Ruhr Statute a new economic agglomeration under capitalist direction. The GDR mentioned the founding of NATO three weeks earlier in the same breath as the

“Establishment of an international Ruhr authority (Ruhr statute) excluding the USSR with the aim of integrating the former armory of the Hitler Empire into the armaments interests of the signatories and NATO countries (decisions on the division of coal, coke and steel production). The course was set for the formation of a West German separate state. "

But criticism also came from the West German camp. The state government of North Rhine-Westphalia under Prime Minister Karl Arnold tried as early as 1948, before the Ruhr Statute was published, through a large number of memoranda, through the mobilization of counterparts in the other countries and through a media campaign in foreign, mainly British and American newspapers, for the To advertise the position that the planned Ruhr Statute must be changed because it discriminates against Germany and fatally restricts its freedom of movement. He advocated greater German participation in the decision-making bodies of the International Ruhr Authority and called for the statute to be extended to all other similar industrial centers in Europe.

“The Ruhr Statute is the tragic failure of the post-war period. [...] The ultimate consequence of the statute is that the way of life, the standard of living of the German people, is no longer dependent on German efforts, German industry and German social policy, but on the vote of interested parties and competitors in German economy. "

In a Bundestag debate on November 25, 1949 on the signing of the Petersberg Agreement and the associated accession of Germany to the Ruhr Authority, Federal Chancellor Konrad Adenauer said:

"If I had passed a law, the dismantling would have progressed to an unbearable stage for us before it was finally passed after about eight weeks."