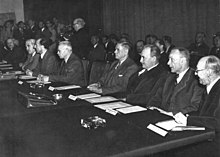 The Frankfurt documents are three powers of attorney granted by the western victorious powers to the prime ministers and mayors of the German states in the western occupation zones by the military governors on July 1, 1948. They were given the order to found a western state .

It was the first reception of the Prime Ministers in post-war history that was not about regional problems but about the future constitution of West Germany. The documents formed one of the working bases for the conferences at which the preparatory work for the Basic Law for the Federal Republic of Germany was carried out, and were therefore an important building block on the way to the establishment of the Federal Republic of Germany .

The documents were drawn up at the London Six Power Conference , at which the solution to the western state was decided. As a first step in this direction, a currency reform came into force on June 20, 1948 in the three western zones . Then had Soviet leader Stalin with the freezing of all land and water connections to Berlin answered and the command in the Soviet zone of occupation and in Greater Berlin to carry out its own currency reform.

These recommendations did not provide for an all-German solution, but for a new, western German state, which was heavily criticized.

In the first of the three documents, the Prime Ministers received the following "recommendations":

Document II called on the Prime Ministers to make proposals on the territorial reorganization of the countries:

Document III provided information on the framework of an occupation statute which, according to the will of the victorious powers , was to be put into effect for Germany at the same time as a constitution .

The Allies reserved the right to observe and advise the future federal government and the state governments on the democratization of political life, the regulation of social relations and education.

The Prime Ministers asked for a deadline for their answer and decided to meet for a discussion at the Rittersturz in Koblenz , for the Rittersturz conference from July 8th to 10th. This is where the Koblenz resolutions were passed.