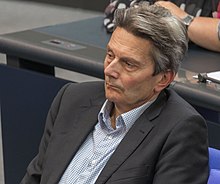 Rolf Mützenich in the Bundestag (Photo: 2020)

Rolf Mützenich (born June 25, 1959 in Cologne ) is a German politician ( SPD ). After the resignation of Andrea Nahles , he initially took over as the longest-serving deputy on June 4, 2019 provisional chairmanship of the SPD parliamentary group until he was elected chairman on September 24.

After graduating from high school in 1978, Mützenich, son of a working-class family, began studying political science , history and economics in 1979 , which he completed in 1990 with a degree in political science. In addition to his studies, he organized election campaigns and their office work for members of the state and Bundestag in Cologne. For example for Konrad Gilges , his immediate predecessor in the constituency. In 1991 he received his doctorate as Dr. rer. pole. at the University of Bremen with the work Nuclear Weapon Free Zones and International Politics - historical experiences, framework conditions, perspectives .

Rolf Mützenich is married and has two children.

As a child he was with the falcons and as a schoolboy Mützenich became a member of the SPD at the age of 16 in 1975. He was initially involved with the Jusos and was most recently deputy chairman in the Cologne sub-district. From 1989 to 1993 Mützenich was a member of the security policy commission of the SPD federal executive and from 2001 to 2005 of the federal control commission of the SJD - Die Falken .